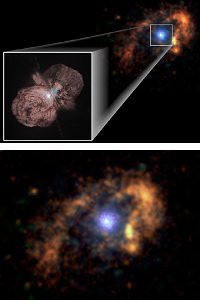 “Just three years ago the Hubble Space Telescope provided a dazzling image of a star that was blowing off massive quantities of material in a blast that looked like a supernova yet, mysteriously, wasn’t one. Now the Chandra X-ray Observatory has looked at Eta Carina and showed details that are, well, shocking.”

A Hubble Space Telescope image of Eta Carina is shown scaled to fit within the much larger X-ray nebula discovered by Chandra. The lobes are as wide as our solar system and expanding in opposite directions away from a central bright disk at speeds in excess of 1 million km/h (600,000 mph). The odd shape is believed to be partly due to the star’s intense magnetic field channeling plasma.

“It is not what I expected,” said Dr. Fred Seward of the Harvard-Smithsonian Center for Astrophysics. The new X-ray observation shows three distinct structures: an outer, horseshoe-shaped ring about 2 light years in diameter, a hot inner core about 3 light-months in diameter, and a hot central source less than 1 light-month in diameter which may contain the superstar that drives the whole show. The outer ring provides evidence of another large explosion that occurred over 1,000 years ago.

All three structures are thought to represent shock waves produced by matter rushing away from the superstar at supersonic speeds. The temperature of the shock-heated gas ranges from 60 million deg Kelvin in the central regions to 3 million K (108 million deg. F to 5.4 million deg. F) on the outer structure.

Since it looked like a supernova, one naturally would assume that was the end of the star. All that should be left are beautiful nebula and, perhaps, a neutron star or black hole where the original star once stood. Instead, Eta Cannae is still there (in a subtle bit of grammar, astronomers refer to the star as Eta Carinae and the nebula as Eta Carina).

For The ELECTRIC UNIVERSE® there are no surprises.

As long ago as 1968 Dr Charles Bruce of the UK Electrical Research Association identified planetary nebulae as bipolar electrical discharges from a central star. Eta Carina obviously belongs in that category.

Unfortunately, astronomers have very limited options in their toolkit to explain 3 million degree temperatures and x-rays from gas more than a light-year from the central star. However, it is simple to explain if it is a plasma heated by electric current being fed into Eta Carinae.

Just as with our own sun, the highest “temperatures” are then encountered outside the star. That would explain why there is relatively little radiation from the star at the centre. Most of the power focussed on the hapless star is being intercepted by distant gas and dust and radiated energetically into space.
Dr. Fred Seward said: “I expected to see a strong point source with a little diffuse emission cloud around it. Instead we see just the opposite- a bright cloud of diffuse emission, and much less radiation from the centre.”

A star is merely a focus of a galactic electric discharge and does not have to provide internal energy to power objects like the Eta Carina nebula.

A good sense of the desperate ideas required to save the old model can be gauged from the following post-script to the NASA report:

“As if its huffing and puffing behavior weren’t weird enough, Eta Carina also appears to be a Death Star powerful enough to make Darth Vader turn in his light saber. Sveneric Johansson, a specialist in atomic spectroscopy at the University of Lund in Sweden, has proposed that Eta Carinae also is acting as a massive ultraviolet laser. Johansson, using Hubble observations made with the Goddard High-Resolution Spectrograph, reported in 1996 that his interpretation is not yet proven, but that it appears to be the most plausible explanation of the data.”