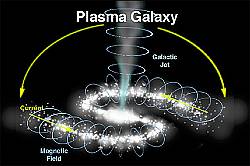 THE BIG BANG NEVER WAS!

The CHANDRA X-Ray Observatory is fulfilling its promise. Modern cosmology is being found wanting with every new discovery. The reason is simple. The universe is governed by the powerful electric force, not gravity. So by detailed imaging in x-rays, Chandra is able to see clearly for the first time the tell-tale signature of electrical activity in the centres of cosmic powerhouses – supernovae and galactic centres. What will replace present cosmology? A new PLASMA cosmology. Plasma constitutes 99.999% of the matter in the universe. It is staggering to realise that Big Bang cosmology is restricted largely to the physics of 0.001% of the universe – solids, liquids and gases on the surface of this planet! And much of the accepted physics of stars is untestable by experiment.

So, what is plasma? In space it is a very tenuous gas in which some electrons have been stripped from atoms leaving behind positively charged ions. The result is a gas which responds to electric and magnetic fields in complex but easily recognizable ways. Plasma researchers have begun their own international meetings on plasma cosmology because they saw objects in deep space that were identical to phenomena seen in their labs. In 1992 Eric Lerner published The Big Bang Never Happened. In it he presented a diagram showing the flow of electric current in a plasma galaxy. 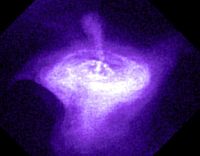 In September, Chandra returned an image of the supernova remnant in the Crab nebula. The press release says: “The center of the remnant contains a rapidly rotating neutron star- or pulsar- that is apparently pumping enormous amounts of energy into the nebula in the form of high-energy particles and magnetic fields. Chandra’s X-ray image provides significant clues to the workings of this mighty cosmic generator…”.

The x-rays trace out the path of electric current in the object. Note the axial jet and flat disk – look familiar?

All of the features of galaxies have been modelled by plasma physicists without the need for ad hoc additions of unseen dark matter or black holes. Plasma cosmology has one great advantage in that the phenomena are scaleable from galaxies down to stars, planets and the lab. So it is possible to bring cosmology back down to earth and do away with invisible dark matter, neutron stars, black holes and the Big Bang. They are unnecessary when the electric force is a thousand trillion trillion trillion times stronger than gravity!

The crab nebula remnant is not a pulsar. It is a normal star unfortunate to be the focus of a powerful galactic discharge. The rapid pulsations from it are the usual result of pouring electrical energy into a tuned circuit. The cosmologists of the future will be electrical engineers!