“To be sure, nature distributes her gifts unevenly among her children. But there are plenty of the well-endowed, thank God, and I am firmly convinced that most of them live quiet, unobtrusive lives.”
– ALBERT EINSTEIN

The pieces of the ELECTRIC UNIVERSE® “Big Picture” are supplied by some remarkable individuals, most of them unknown and who have lived or are living “quiet, unobtrusive lives” away from universities. For those with a sense of history this fact should serve to increase curiosity rather than dull it. Most revolutions in science have come from people who taught themselves outside the academic system and were not constrained by the fallacies and fashions of the day. It has been well documented that modern institutions of science operate in such a way as to enforce conformity and prevent research and publication of revolutionary ideas. J. R. Saul argues that medieval scholasticism was re-established during the 20th century. If so, the new “Enlightenment” will have to come, as before, from outside academia.

For me, enlightenment began with the controversial polymath and author of Worlds in Collision, Immanuel Velikovsky. In 1950 he demonstrated an interdisciplinary, comparative technique for uncovering hard evidence of planetary catastrophe from the recorded memories of the earliest civilizations. His method was forensic in that he looked for reports of physical events of a highly unusual nature that were nonetheless corroborated globally by totally separate cultures. Then by applying scientific knowledge of cause and effect, it was possible to build a very detailed model of the sequence of those events. Finally, the model enabled specific predictions to be made and confirmed – a requirement of a good scientific theory. Some of the predictions he made were outrageous at the time: Venus would be near incandescently hot, Jupiter would emit radio noise, the Moon rocks would be magnetised, and so on. Velikovsky was right, astronomers of the day were wrong. However, you will not find any textbook that gives him credit because his theory was judged to be wrong. Presumably they were all lucky guesses!

It became clear to Velikovsky that Newton’s concept of gravity was insufficient to explain the reported behaviour of the planets. And it certainly could not answer the obvious question, “why do the skies look so peaceful now?” This allowed a dogmatic response by academia to Velikovsky’s seminal breakthrough. It was said his theory didn’t obey Newton’s laws. But what did Newton know of electricity? And if anyone believes that Newton’s laws guarantee a stable planetary system – think again! Any gravitational system with more than two orbiting bodies is unstable. Yet the question is hardly ever asked, let alone answered, “what produces the observed stability of the solar system?” Velikovsky was convinced that the clue lay in his discovery that electrical forces dominate the incredibly weak force of gravity at times of planetary close encounters. Although he was unable to explain at the time how this would create the observed stability of the solar system, with his uncanny prescience he had pointed the way to the ELECTRIC UNIVERSE®. 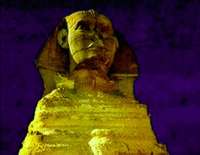 Since then sceptical scholars have shown Velikovsky’s historical perspective of cataclysmic events to be wrong. However, his basic premise of planetary encounters has been confirmed and the details fleshed out to an extraordinary degree. Several pioneering researchers in this new field now agree that awe-inspiring planetary encounters did occur in pre-history. To the most ancient civilizations they were a culturally defining memory. They were the inspiration for pyramids, megaliths, statues, totems and sacred rock art. The survivors of global upheaval felt it imperative that the memory be preserved and passed down faithfully to future generations in the expectation that the “gods” would return. The memorialization took the form of architecture, ritual and story to re-enact the apocalyptic power of the planetary gods over human destiny. Such a catastrophic beginning explains why civilization appeared like a thunderclap out of nowhere. Unfortunately, with no reference points in the present behavior of the planets, the stories lost their real meaning. This short explanation may seem contrived until the wealth of supporting evidence can be presented. However, it highlights the crucial distinction between the planetary catastrophism of the ELECTRIC UNIVERSE® and that of neo-catastrophists who attempt to explain the evidence for planetary encounters in terms of cometary phenomena. Modern comets simply do not fit the descriptions from the past. Nor can they account for abundant evidence of fresh looking planetary cratering and scarring. Besides, in an ELECTRIC UNIVERSE® comets are not the apocalyptic threat to the Earth imaginatively portrayed by artists. Such pictures are entirely fanciful because a comet would be disrupted electrically by a cosmic thunderbolt before it hit the Earth. The only visible evidence remaining would be an electric arc crater like Meteor Crater in Arizona.

The ELECTRIC UNIVERSE® model grew from the realization that a new plasma cosmology and an understanding of electrical phenomena in space could illuminate the new work being done in comparative mythology. In return the images of events witnessed in the prehistoric sky and their sequence could help unravel the recent history of the Earth, Mars and Venus. By accepting data over a far wider span of knowledge and human existence than conventional cosmology allows, the ELECTRIC UNIVERSE® model began to provide pragmatic and common sense answers to many questions that seem unrelated. It followed the entreaty of the Nobel Prize winning plasma physicist and cosmologist, Hannes Alfvén, to work backwards in time from observations rather than forward from some idealized theoretical beginning.

“We have to learn again that science without contact with experiments is an enterprise which is likely to go completely astray into imaginary conjecture.”
– Evolution of the Solar System, NASA 1976, H. Alfvén & G, Arrhenius, p. 257.

The result is now a “Big Picture” that emphasizes our dramatic prehistory and essential connectedness to the universe. No longer do we have to look at ourselves and the universe through the distorting sideshow mirrors of modern science.

The implications of electrical activity between planets will be profoundly disturbing for those who have built their cosmology around the weak force of gravity, acting in an electrically sterile universe. This strange, dogmatic oversight guarantees that nothing will remain in future of the fanciful Big Bang theory or the simplistic story of the formation of the solar system.