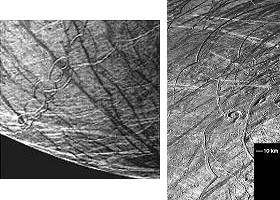 Why did the planetary gods dominate our imagination at the dawn of civilization? Yet nine out of ten people today could not identify bright Jupiter in the night sky. And another question that is never asked, what was really meant by Jupiter’s weapon, the thunderbolt? 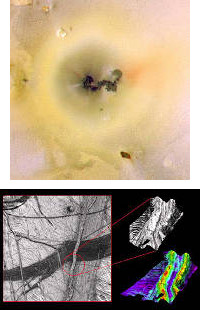 It seems it was no earthly lightning. It moved “like a hot coal, spat from a fire.” And depictions of Jupiter show his thunderbolt to be an odd shape rather like a corkscrew or football. It is a form expected only from modern plasma physics! So, if Jupiter has had a shoot-out in the dim past, what “smoking guns” should we expect to find?

Let’s look at the two large moons closest to Jupiter, Io and Europa: As reported in Holoscience news of 8 October, Io’s gun is still smoking! Its surface is being spark machined under the gaze of the Galileo spacecraft. Geologists, handicapped by earthly comparisons, have had to resort to volcanoes to explain what are clearly plasma jets on Io.

What earthly volcano has a caldera that moves tens of kilometres in a year or two? What volcano can loft material hundreds of kilometres into space? The dark feature is not a lava flow – it is subsurface material exposed and burnt by the wandering arc. There will not be a single hot caldera but rather a series of intensely hot cathode “spots” sitting on high points of the crater rim. They give rise to the very fast “cathode jets” seen as faint blue radial streaks in the picture.

But it is the more distant moon, Europa, that has a frozen record of strikes by Jupiter’s thunderbolts in the recent past. It was not a target itself but it bears the scars from being caught in the crossfire. Just as lightning looks for the easiest path to ground, Jupiter’s thunderbolts preferred to run across the surface of Europa rather than through the near vacuum of space. The result is a filamentary pattern of superimposed furrows running this way and that for hundreds and thousands of kilometers across the face of the moon. As the surface lightning blasted its way across the moon, it heaped material to either side to form levees. It ripped across earlier channels as if they were not there. Jupiter’s lightning was so powerful that it converted some of the oxygen in the water ice to sulfur – creating the dark colouration down the centre and to either side of the large furrows. (The same process on Io over thousnds of years has coated that moon with sulfur so that it now looks like a “pizza”).

Geologists, straining for an earthly explanation of Europa’s appearance have come up with cracked ice. But no ice field on Earth produces sinuous channels with levee banks. And there is one strange pattern that has defied sensible explanation – the hundreds of kilometers long cycloidal cracks called flexi.

(A cycloid pattern is traced out by a spot on a wheel rim as the wheel rolls along a surface. In other words it is two kinds of motion added together – rotational and linear).

Again, the electrical explanation is simple. We have already seen linear motion of the arcs recorded by the straighter furrows. And circular motion of an arc can be demonstrated in the lab by having a magnetic field parallel to a cathode surface. So when Europa became entangled in Jupiter’s thunderbolt and the powerful magnetic fields carried with it were momentarily draped over the moon’s surface, cycloidal furrows were simply created by rotating travelling arcs.

Europa receives a lot of attention because it is thought to have an ocean that might harbour life hidden under the icy surface. But if geologists’ cracked ice models are so wide of the mark then they may be disappointed. On the other hand, the electrical model suggests a far more interesting history of the solar system than textbooks allow!