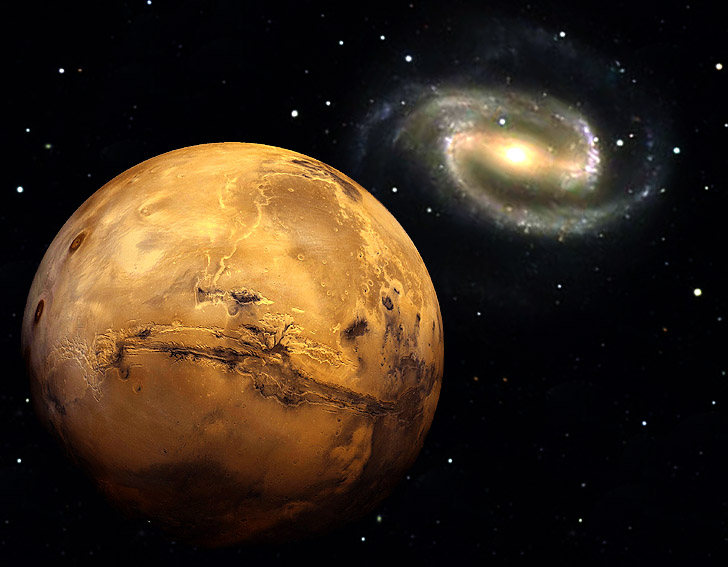 The grandest canyon in the solar system is Valles Marineris on Mars. It stretches a third of the way around the planet. But what in heaven can spiral galaxies have to do with the geology of Mars?

In October 2001, I wrote “In light of more than a century’s research in the field of plasma cosmology and the 20th century discoveries of the space age, we can confidently propose the celestial thunderbolt as a common cause of the formation of canyons and rilles on rocky planets and moons.”

At that time I had not come to any conclusion about the details of the electrical event that created the colossal Valles Marineris canyons on Mars. Like geologists, I use a process of pattern matching when attempting to understand the processes that may have formed a feature seen on the surfaces of planets and moons. But unlike geologists, who have been seriously misled by astrophysicists and are now confused by what they see on Mars, I have the luxury of contemplating the effects of the most powerful erosion force in the universe – that of the electric arc.

Following the lead provided by Ralph Juergens in the 1970’s I looked at the detailed morphology of Valles Marineris to conclude that it was a scar caused by a cosmic discharge. But the question remained: how did the arc move to create a chasm at least 4000 kilometres long? There is no obvious start or finish to the canyons. Indeed there is a kind of symmetry about the central region of Melas Chasma.

Electrical effects offer a unique advantage in being scalable over more than 14 orders of magnitude. In other words, erosion effects observed under an electron microscope provide direct insights into planetary features on a scale of hundreds or thousands of kilometres. However, I had limited my perspective by not looking at large scale galactic objects to see if there were any clues in their patterns to the much smaller features on planetary surfaces. The connection lies in the fact that galaxies are the largest visible electric discharge phenomenon in the universe.

That may be a controversial statement when conventional astrophysics uses the weakest force in the universe, gravity, in a fruitless attempt to explain the dynamics of galaxies. It is a glaring indictment of the way science works when a compelling competing theory is neither mentioned nor tested against an accepted theory that requires ad hoc and mysterious “dark matter” and “dark energy” in order to appear to work. It has forced plasma physicists and the IEEE to hold separate meetings and to publish papers on plasma cosmology. With a very few notable exceptions, the astronomical community ignores the subject.

The strongest support for plasma cosmology comes from the close correspondence between observations, supercomputer simulations and experiment. It does not require any new forces, new physics or phantom particles to force a match with observations. It explains why galaxies naturally favor the beautiful spiral form. Gravity alone can only produce featureless disks. The current theory of planet formation relies on this fact.

In the simulation of the electrical formation of a spiral galaxy the two fuzzy spots in the earlier frames show where two cosmic current filaments pass vertically through the plane of the developing galaxy. The force between these cosmic current filaments is more powerful and long-range than gravity, declining linearly with distance. It leads to a natural pairing of filaments when many filaments are present in plasmas in which the magnetic field plays a major role.

I accounted for the pairing and rotation of plasma current filaments when explaining the formation of circular craters. However, it was not until I examined the MOLA topographic map of Mars (above) that I realized the extended form of Valles Marineris and connected canyons was identical to that of a classic barred-spiral galaxy.

All of the enigmatic large-scale features of Valles Marineris then have a coherent and simple explanation. Note the tendency for Ius Chasma to be concave downwards and Coprates Chasma to be concave upward. That matches the effect seen in Bostik’s lab experiment above. Also many odd details make sense. For example, for the aficionados of powerful plasma discharges, the “bar” is formed by Ius Chasma to the west and Coprates Chasma to the east. At their extremities they “pinch” down before entering large chaotic regions, Noctis Labyrinthus in the west and Capri Chasma and Eos Chasma in the east. This is typical of diocotron instabilities that sometimes occur in the arms of spiral galaxies. After pinching down, the discharge curves and balloons out. The surface damage is spread over a greater area, forming chaotic etched terrain in the east and a vast system of pitted trenches in the west. The act of pinching the discharge leads to filamentation, which may be seen in the thin parallel channels at the extremities of the main canyons. The filamentation instability occurs most readily at large currents. This effect could also explain the tendency to “doubling” of the canyons, to form a central ridge.

Electrons rushed from remote regions along the outer “spiral arms” of Claritas Fossae in the west and a number of channels including Tiu Vallis in the east. In doing so they created the usual electrically scoured channels. As Michael Carr, leader of the Viking Orbiter imaging team noted, “Canyons, chaos and outflow channels are thus physically connected, and their origins may be in some way related.”

There are some smaller parallel canyon systems, closed at both ends, to the north of Valles Marineris. They appear to be the result of smaller discharges of the same type as created Valles Marineris, probably immediately following the main stroke. Multiple strokes, decreasing in intensity, are a well-known characteristic of lightning.

No one was there to witness the evolution of the Earth, so geologists have constructed an elaborate story about the history of the Earth. It is founded upon a simple belief that the planets were all formed at about the same time and have remained for billions of years in their present orbits. It was inevitable that chapters of the Earth’s story would be translated to Mars. The result is a succession of hypothetical Martian “ages” including a “Noachian” age of deluge. And remember that this is a story about a frozen desert planet!

One of the most highly developed capabilities of the human mind is to concoct stories. Equally, we have a strong desire to be told stories and to believe them. If we believe a story to be true we have a strong tendency to accept confirming evidence and to ignore contrary evidence. Geologists are human and show the same tendencies when explaining planetary surface features.

The idea of former oceans and rivers existing on Mars came from the many scoured channels and the flat, low terrain in the northern hemisphere. This marked hemispheric dichotomy is inexplicable by any known geological or astronomical effect. It has never occurred to geologists that the agent involved was electrified plasma. Why should it? Astrophysicists tell them that we live in an electrically neutral universe in which cosmic charge separation is impossible. But if that single assumption is incorrect everything changes. If the visible universe suffers cosmic charge separation then we have a source of energy to build and shape galaxies, light stars, give birth to planets, organize stable orbits and leave the resulting scars of electrical transactions on all solid bodies.

Implications of the Plasma Model

Gigantic fresh scars show that Mars has suffered recently and terribly. Millions of cubic kilometres of jagged boulders were burnt and torn from its surface and strewn from horizon to horizon – as all of the images relayed from the surface have shown. The implications for the search for life on Mars are profound. If there was a past environment conducive to life on Mars it has been wrecked. Not only the surface suffered but also the atmosphere was stripped and exogenous gases and solids dumped on the hapless planet. Mars’ orbit and climate changed drastically.

See the THEMIS website for the fullsize image of the eastern end of Ius Chasma.

The term “mass wasting” for Valles Marineris is a euphemism for the disappearance of millions of cubic kilometres of rock and soil. The two mechanisms proposed for the formation of Valles Marineris are underground water erosion or massive surface rifting. Neither stand up to scrutiny. There is no mechanism available to geologists to cause mass wasting, particularly on such a gargantuan scale. The minor features are merely explained in an ad hoc fashion.

The electrical model now has a coherent explanation for the broadest features of five major and distinct landforms associated with Valles Marineris. The five features are:

The missing mass (shades of the purely gravitational thinking of astronomers) was not transported or buried on Mars. It was lofted toward space by blast and electrical forces. The same kind of process operates far more quietly today on Io, lofting matter hundreds of kilometres into space. The fact that we receive martian meteorites today is solid evidence of the removal of rocks from the surface of Mars in the recent past.

The electrical model also explains the detailed features. The small ripples on the canyon floor are not sand dunes but a solid reminder of the path of the arc that blasted the canyon. They are massive “fulgurites” – the glassified sand formed by underground lightning. They are transverse to the arc because they record the corona discharge filaments associated with lightning. The same effect seems to have solidified the soil along the ridge crests into “Lichtenberg figures,” which is another characteristic pattern created by lightning. Ridge crests and canyon edges would be the focus of secondary discharges. The raked appearance of the slopes are probably the result of surface lightning feeding the ridge crests with electrons to satisfy the discharges there. We find such patterns of grooves on objects as diverse as asteroids, moons and planets.

For reasons yet to be revealed, I think it likely that Mars in the recent past had an environment not much different to that of the Earth. But the extensive layering on Mars suggests the earlier environment was globally and episodically buried and electrically scarred when that changed . That could explain the detection of extensive subsurface ice, if the hydrogen signature found by the Odyssey spacecraft is due to water. Certainly, Martian craters with flow features away from their rims fit such a picture. The flows are due to electric heating of ices by subsurface currents flowing away from the arc that formed the crater.