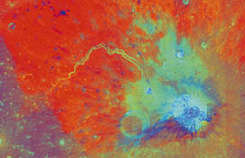 IT HAS TO BE MOONGLOW!

The region around the crater Aristarchus (at lower right) has been a focus for observers searching for transient lunar phenomena. This false-color mosaic was assembled from blue, red, and near-infrared images taken by the Clementine spacecraft and represents brightness ratios between the wavelengths. Images taken several weeks apart reveal a surface change in the cobra-head crater at the right-hand end of the meandering channel of Schröter’s Valley. Courtesy Paul Spudis.

This past week 700 planetary scientists from around the world gathered in Abano Terme, Italy, to present their latest observations from ground- and space-based instruments. Sky & Telescope’s Senior Editor J. Kelly Beatty filed this report from the conference. The week-long meeting [of the American Astronomical Society] featured the first unambiguous confirmation of a spontaneous change in a feature on the Moon. Amateur observers have claimed to witness dozens of transient lunar phenomenon (TLPs) for decades, but most professionals found the reports unconvincing because the events were almost always seen only visually. Now, however, a group led by Bonnie Buratti (Jet Propulsion Laboratory) has found “before” and “after” images from the Clementine spacecraft for an TLP reported last April 23rd. The area in question, the “cobra head” at the beginning of Schröter’s Valley near the crater Aristarchus, is covered by relatively young volcanic flows, and it has often been the location of TLP sightings. Buratti says two bright spots along the valley’s western wall are distinctly redder in the Clementine “after” images from April 27th ? a clear indication that some kind of change took place subsequent to the “before” images taken March 3rd.

Just as astronomers would not believe that stones could fall from the sky, most have baulked at the idea that our long-dead Moon could show signs of life. Yet there have been many reports in the last century from reputable observers of glowing patches, point-like flashes and obscurations on the Moon. Now the Clementine lunar orbiter has confirmed a transient change in redness in a lunar crater. Explanations have involved outgassing, volcanism, raising of moondust, and rock fluorescence under bombardment from solar wind particles. However, the emission of visible light is poorly understood. In this case, remnant vulcanism is thought to be most likely. Rilles are thought to be collapsed lava tubes.

But Schröter’s Valley is not volcanic. That brilliant engineer, the late Ralph Juergens, showed in the early 1970’s that it is a typical scar caused by a massive lightning bolt. If it were volcanic, where is the lava outflow? Where is the collapsed roof of a lava tube? Where do we find lava tubes 7 km wide? How could a flowing liquid of any sort form the tortuous inner channel on the valley floor? Why does that channel become narrower toward its “outflow” end? How do some rilles cross mountains?

The ELECTRIC UNIVERSE® model has a simple explanation. All bodies in the solar system are embedded in an electric glow discharge, centred on the Sun. The Moon is subject to some of the electrical input that produces planetary aurorae, lightning on Earth and Venus, planet-wide dust-storms and huge dust-devils on Mars, and “volcanoes” on Io. Because the Moon has no atmosphere, electric discharges are diffuse – creating glows over large areas. Flashes are due to sudden concentration of the discharge at high points, known on Earth as St. Elmo’s fire, and the occasional true lightning. Obscuration by dust is due to electrostatic levitation. Whatever made Schröter’s Valley a target for lightning in the past is likely to make it a prime target now and well worth watching for further TLP’s. Lunar explorers in future should take lightning conductors with them!