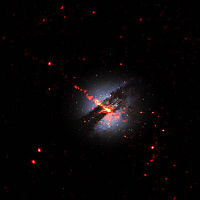 NASA’s premier X-ray observatory was named the Chandra X-ray Observatory in honor of the late Indian-American Nobel laureate, Subrahmanyan Chandrasekhar. He was widely regarded as one of the foremost astrophysicists of the twentieth century.

Early in his career he demonstrated that there is an upper limit (now called the Chandrasekhar limit) to the mass of a white dwarf star. A white dwarf is the last stage in the evolution of a star such as the sun. When the nuclear energy source in the center of a star such as the sun is exhausted, it collapses to form a white dwarf. This discovery is basic to much of modern astrophysics, since it shows that stars much more massive than the sun must either explode or form black holes.

In fulfilling the promise expected of it in the ELECTRIC UNIVERSE®, it is ironic that the Chandra X-ray Observatory will render obsolete the life’s work of its namesake.The proposal by astrophysicists that stars can collapse to form white dwarfs or black holes is to extend to the giddy limit the ignorance we have of how our own Sun functions. It seems that astrophysicists are inured to the real meaning of the immense numbers they use daily in their work. Think about it – who in their right mind would use a force to accelerate particles that is weaker than the electric force by a factor of 10 followed by 35 zeroes? The simplest way for Nature to generate x-rays is to accelerate electrons electrically – just as we do in our hospitals. So x-ray bright objects in space are pin-pointing active electrical, not gravitational phenomena.

Astronomers are ecstatic again over the latest view from the Chandra X-ray Observatory. An image of the active galaxy Centaurus A (NGC 5128) released Monday provides never-before-seen detail of the powerful jets, as long as our whole galaxy is wide and eminating from the galaxy’s core, which contains a supermassive black hole. “The Chandra image is like having a whole new laboratory to work in,” says Giuseppina Fabbiano (Harvard-Smithsonian Center for Astrophysics). “Now we can see the main jet, the counter jet, and the extension of the jets beyond the galaxy. It is gorgeous in the detail it reveals.” The new X-ray image also shows a cluster of X-ray hotspots around the core, which is hidden from visible-light view by a dark lane of dust. x-ray jets. The image helps give new insight into what happens when galaxies collide.

There is no “supermassive black hole” at the centre of Centaurus A. The jet we see is the result of a simple plasma focus effect. It is a phenomenon being studied in several laboratories around the world because of its ability to produce powerful narrow beams of particles and radiation. Electric current flowing into the centre of a galaxy along its spiral arms creates powerful magnetic fields at the centre that wind up like a giant cosmic spring. At some moment, the spring effectively snaps – accelerating matter in opposed beams out of the plane of the galaxy. The repetitive nature of these outbursts can be seen in the bright x-ray blobs along the beam. This is one of the closest active galaxies to the Milky Way.

But wait, there is much, much more to this picture than meets the eye. The NASA image is cropped. The galaxy is not colliding with anything. The astronomer, Halton Arp, in his paradigm shifting book, “Seeing Red” (see link page for his book) finds this part of the sky so exciting that he uses italics and exclamation points liberally as he describes the area in the direction of the jet: “… CenA, … with its outer radio isophotes sketched in, resembles a flame with the sparks of galaxies and clusters rising upward.” [Seeing Red, pp. 147, 148].

Arp makes a convincing argument for the birth of new galaxies in such jets from the centres of active galaxies! In that process he has proven that faint, highly redshifted galaxies are merely youthful – not distant. There was never a Big Bang!

Arp goes on: “Since the higher redshift galaxies in the CenA line are presumed to have originated in ejection from this giant, active radio galaxy, the Abell clusters so densely surrounding those second generation galaxies are implied to be third generation ejecta – in various directions, but still relatively close to their galaxies of origin.”

From the standard viewpoint there is no connection between Centauras A and the dozens of bright galaxies stretching away along its spin axis. So, in all of the website photos you only see the galaxy and its jet – the flame Arp refers to, but none of the sparks.

With thanks to Amy Acheson for her contribution