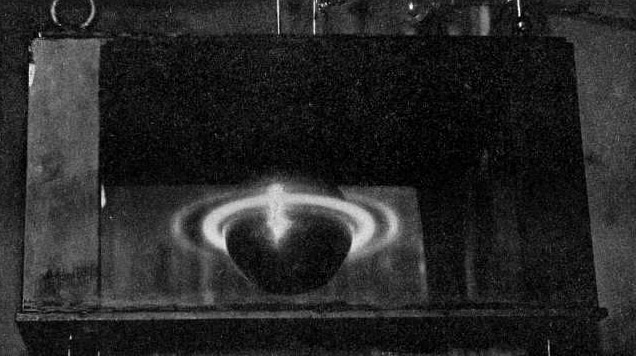 The ‘Spiral Galaxy’ at Saturn’s Pole

Poincaré, at the conclusion of the preface to his book, ‘Hypothéses Cosmogoniques‘, states:

“One fact that strikes everyone is the spiral shape of some nebulae; it is encountered much too often for us to believe that it is due to chance. It is easy to understand how incomplete any theory of cosmogony which ignores this fact must be. None of the theories accounts for it satisfactorily, and the explanation I myself once gave, in a kind of toy theory, is no better than the others. Consequently, we come up against a big question mark.”

Nothing has changed in 100 years. Spiral galaxies remain an enigma to astrophysicists who have had to resort to magical ‘dark matter’ in an attempt to save appearances. Consequently there is no recognition of a connection with other spiral forms seen much closer to home.

On this website I have made many successful yet unusual predictions based on the ELECTRIC UNIVERSE® cosmology. For example, what would be seen when close-ups were taken of Io’s ‘volcanoes’; the initial flash and unexpected outburst from Deep Impact; what would be found beneath the clouds of Titan; and the link between spiral forms at the poles of Venus and the ‘hot spot’ at Saturn’s south pole. If the test of a good theory is successful predictions, the ELECTRIC UNIVERSE® is unparalleled. Even better if it can simply explain details in the new images of Saturn’s south pole.

NASA SEES INTO THE EYE OF A MONSTER STORM ON SATURN
>> Cassini stares deep into the swirling hurricane-like vortex at Saturn’s south pole, where the vertical structure of the clouds is highlighted by shadows.
Credit: NASA/JPL/Space Science Institute

From the NASA report: ” NASA’s Cassini spacecraft has seen something never before seen on another planet — a hurricane-like storm at Saturn’s south pole with a well-developed eye, ringed by towering clouds. The “hurricane” spans a dark area inside a thick, brighter ring of clouds. It is approximately 8,000 kilometers (5,000 miles) across, or two-thirds the diameter of Earth.

“It looks like a hurricane, but it doesn’t behave like a hurricane,” said Dr. Andrew Ingersoll, a member of Cassini’s imaging team at the California Institute of Technology, Pasadena. “Whatever it is, we’re going to focus on the eye of this storm and find out why it’s there.”

A movie taken by Cassini’s camera over a three-hour period reveals winds around Saturn’s south pole blowing clockwise at 550 kilometers (350 miles) per hour. The camera also saw the shadow cast by a ring of towering clouds surrounding the pole, and two spiral arms of clouds extending from the central ring. These ring clouds, 30 to 75 kilometers (20 to 45 miles) above those in the center of the storm, are two to five times taller than the clouds of thunderstorms and hurricanes on Earth.

Eye-wall clouds are a distinguishing feature of hurricanes on Earth. They form where moist air flows inward across the ocean’s surface, rising vertically and releasing a heavy rain around an interior circle of descending air that is the eye of the storm itself. Though it is uncertain whether such moist convection is driving Saturn’s storm, the dark “eye” at the pole, the eye-wall clouds and the spiral arms together indicate a hurricane-like system.

Distinctive eye-wall clouds had not been seen on any planet other than Earth. Even Jupiter’s Great Red Spot, much larger than Saturn’s polar storm, has no eye or eye-wall and is relatively calm at the center. This giant Saturnian storm is apparently different from hurricanes on Earth because it is locked to the pole and does not drift around. Also, since Saturn is a gaseous planet, the storm forms without an ocean at its base.

In the Cassini imagery, the eye looks dark at infrared wavelengths where methane gas absorbs the light and only the highest clouds are visible. “The clear skies over the eye appear to extend down to a level about twice as deep as the usual cloud level observed on Saturn,” said Dr. Kevin H. Baines of Cassini’s visual and infrared mapping spectrometer team at NASA’s Jet Propulsion Laboratory, Pasadena, Calif. “This gives us the deepest view yet into Saturn over a wide range of wavelengths, and reveals a mysterious set of dark clouds at the bottom of the eye.”

Infrared images taken by the Keck I telescope in Mauna Kea, Hawaii, had previously shown Saturn’s south pole to be warm. Cassini’s composite infrared spectrometer has confirmed this with higher-resolution temperature maps of the area. The spectrometer observed a temperature increase of about 2 Kelvin (4 degrees Fahrenheit) at the pole. The instrument measured high temperatures in the upper troposphere and stratosphere, regions higher in the atmosphere than the clouds seen by the Cassini imaging instruments.

“The winds decrease with height, and the atmosphere is sinking, compressing and heating over the South Pole,” said Dr. Richard Achterberg, a member of Cassini’s composite infrared spectrometer team at NASA’s Goddard Spaceflight Center, Greenbelt, Md.

Observations taken over the next few years, as the south pole season changes from summer to fall, will help scientists understand the role seasons play in driving the dramatic meteorology at the south pole of Saturn.”

“…maybe things that can’t be explained get forgotten! Saturn’s ‘warm polar vortex’ is NOT ‘the first to ever be discovered.’ Professor F. W. Taylor reported the Venusian vortex in 1990. The Pioneer Venus Orbiter (PVO) discovered a warm ‘giant vortex of surprisingly complex structure and behaviour located in the middle atmosphere at the north pole of the planet, with a similar feature presumed to exist at the south pole also.'”

“…we watch with great interest the data coming back from the Venus Express spacecraft. Already, in the first images from Venus, we find confirmation of an earlier prediction. On February 5, 2005, in explaining the mysterious north polar vortex on Venus, I wrote: “…we should expect to see evidence of the twisted pair configuration at the poles of Venus, if the input current is sufficiently strong and this model is correct.” “The Venusian polar dipole shows the precise configuration and motion of Birkeland current pairs in plasma discharge experiments. That includes a surrounding spiral vortex.”

Professor Taylor had written earlier about the Venusian north polar vortex: “the absence of viable theories which can be tested, or in this case any theory at all, leaves us uncomfortably in doubt as to our basic ability to understand even gross features of planetary atmospheric circulations.” So there was no reason, other than an appeal to symmetry, for scientists to expect a similar vortex at the south pole of Venus. Based on the electrical model, I predicted that Venus’ south pole would also have a vortex. I make the same prediction for Saturn’s opposite (north) pole. Cassini scientists are unsure because the north pole is in darkness and receives no solar heat.

In a keynote address at the Marshall Space Flight Center in March 1986, Hannes Alfvén complained that the most used textbooks in astrophysics do not treat important concepts like double layers, critical velocity, pinch effects and circuits.

“Students using these [astrophysics] textbooks remain essentially ignorant of even the existence of these [concepts], in spite of the fact that some of them have been well known for half a century. The conclusion is that astrophysics is too important to be left in the hands of the astrophysicists. The billion-dollar telescope data must be treated by scientists who are familiar with laboratory and magnetospheric physics and circuit theory, and of course with modern plasma theory.”

Twenty years later, this has not been done. The inertia of institutional specialization infects modern science and education. Astrophysicists with inappropriate and narrow training remain in control. Meanwhile the puzzles facing the space sciences multiply by the day and falsifiable predictions (the best test of a good theory) are rare—and even more rarely successful. This contrasts starkly with the ELECTRIC UNIVERSE® model, which recognizes Alfvén’s pioneering insights and has many successful predictions to its credit, including this one on Saturn.

The imagery of Saturn’s south polar hot spot is now sufficiently detailed to require more explanation than was given in my earlier news items. The electrical model of Saturn has the planet participating as a minor cathode in the solar circuit. Birkeland showed experimentally how Saturn’s enigmatic rings could be the result of an electric discharge to a magnetized sphere, representing the planet, and acting as the cathode.

After 100 years Birkeland’s simple electrically driven model is unmentioned in astrophysics textbooks! It is a disturbing illustration that astrophysics has no interest in experimental evidence that doesn’t fit the dogma of an electrically inert universe. For this and other reasons, history will view the 20th century as a dark age of science. It is perhaps unfortunate that burgeoning technology has masked the stagnation in fundamental science.

It is this behavior of twin Birkeland current filaments that explains the detailed features of Saturn’s polar ‘hurricane’.

The image above, while being incomplete, supports the electrical model. At around 300˚ we see the yellow-reddish cusp feature of one Birkeland filament. At intervals, heated gas from that filament is ‘squirted’ in a thin jet into the central ‘sump,’ indicated by the reddish patch over the pole. The inward jets alternate between the two filaments so we may expect the pattern to be repeated where the infrared data is missing.

The seasons play little role on Saturn, which is almost 10 times further from the Sun than the Earth and the solar heating only 1% of that here. The center of the ‘storm’ is fixed over the pole because it is an electrical discharge phenomenon linked to Birkeland currents that follow Saturn’s neatly aligned magnetic field directly to the planet’s pole of rotation. The spiral pattern is most clearly seen in this infrared image and the two cusps are evident inside the central ring of clouds. And the pattern of dark spots in the polar region is best explained by electric discharges.

On a galactic scale, twin interacting Birkeland current filaments produce the spectacular spiral galaxy formation. Here, on Saturn, we have a natural laboratory to study the dynamics of spiral galaxies.

Armed with these new insights, let’s take another look at the ‘eye’ of Saturn’s hurricane.

It is clear why Professor Taylor and other specialists are “…uncomfortably in doubt as to our basic ability to understand even gross features of planetary atmospheric circulations.”

The primary energy source in the universe has been overlooked.