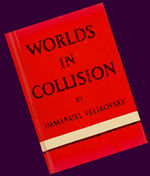 The impact of pseudo-science

This year is the 50th anniversary of the publication of an astonishing and controversial book – Worlds in Collision. The provocatively titled 1950 book was written by Immanuel Velikovsky and caused an unprecedented furor in scientific circles. It led to the transfer of the book from the hurting academic publisher and dismissal of those who publicly supported the work. Among those summarily sacked was the distinguished Gordon Atwater, curator of the Hayden Planetarium, who planned to dramatize the book using the planetarium.

In 1974, the AAAS held a session in San Francisco which was supposed to allow Velikovsky a forum to answer his critics. It was, as it transpired, a disgraceful ambush. 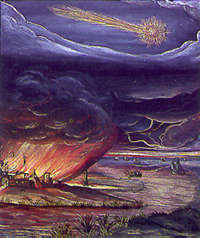 Now, some quarter century later, the American Association for the Advancement of Science (AAAS) has discussed a similar topic but without Velikovsky’s presence. The subject was “unpredictable events of extra-terrestrial origin and their impact on humanity”. It was an occasion for the the sensationalists to parade their predictions of doomsday by impact from a comet or asteroid. It also became another opportunity for academics to rewrite history and indulge in yet another miserable attack on Velikovsky. As reported in the WhyFiles: “…there are some neo-catastrophists, located mainly in Britain, who have an almost Velikovskian pseudo-scientific take on this matter and have argued that such impacts are more frequent … Velikovsky, of course, is the guy who gave asteroid impacts such a bad name back in 1950.” See: http://whyfiles.news.wisc.edu/106asteroid/index.html [dead link 2012]

It seems unlikely that Velikovsky’s historical reconstruction of planetary catastrophes is correct and it is the British neo-catastrophists rather than academia who we have to thank for their scholarly work on the subject. However they have not argued for more frequent asteroid impacts. None of this denies Velikovsky priority in identifying the major destructive influence in the Earth’s past as the near approaches of the planets Mars and Venus. His reconstruction of awesome celestial events in the dimly remembered past follow the laws of physics and the rules of evidence. His model is a good one when measured by its prediction score against that of conventional models. Conventional models are woefully deficient to pronounce upon impacts ands their effects. To begin with, planetologists have admitted they are unable to experimentally reproduce the features of so-called impact craters. So, what are the craters? If they are not a result of impacts, what possible use are they in predicting future impacts? Is the science of impacts a pseudo-science?

Amazingly, Mars was often sculpted by ancient artists as a sphere. How could it be if Mars has always occupied its present orbit? The list is very long of other striking anomalies that have to be ignored by astronomers to maintain the status quo. A science that willfully disallows the documentary evidence for planetary encounters amassed by Velikovsky, and others since, is itself a pseudo-science.

One point I will concede to the astronomers. Velikovsky’s book title is misleading. It is not about colliding planets or asteroids. It seems there is an intrinsic avoidance mechanism involving cosmic electric discharges. But no astrophysicist on this planet is taught anything about electric discharges in space. Proof of that can be seen in the Tethered Satellite debacle. Yet the ancients reported planetary thunderbolts that wrought destruction on a global scale. That is where we must begin to look for the cause of cratering. Jupiter’s thunderbolt is said to have created the colossal scar of Valles Marineris in a moment on Mars’ face. Planetologists, in their limited view, have attributed it to water erosion.

As Sir Fred Hoyle wrote, “… could it be that Velikovsky had revealed, admittedly in a form that was scientifically unacceptable, a situation that astronomers are under a cultural imperative to hide? Could it be that, somewhere in the shadows, there is a past history that it is inadmissable to discuss?” The answer is obviously “yes”. But Hoyle shows his own Achilles heel when he mentions Velikovsky’s documentary evidence as being “scientifically unacceptable”. He is not alone when he writes “… we believed in the primacy of mathematical rules…”. But who is to say what the rules were when Jupiter hurled thunderbolts? Certainly not the rules of Sir Isaac Newton, who knew nothing of electricity. It is inadmissable to discuss Velikovsky’s work because it requires a revolution in science. Astronomy would have to leave the gas-lit Victorian era and enter the era of the electric light. But science does not welcome revolution. Hoyle again: “Slender progress means that the sheep cannot be separated from the goats. Nothing happens to threaten existing establishments… When there is near zero progress, slight steps can be misinterpreted (or misrepresented) as large steps, governments can be urged to throw immense sums of money into the air in the vain hope that something of value will be forthcoming, and, above all, establishments can perpetuate themselves.”

I leave the last word on the subject to Mel Acheson…………….

When the Hebrews prepared to invade the land of Canaan, they were given the imperative to kill all the inhabitants, including the cattle. They didn’t kill all the cattle, and they were punished. But they did write the history so God was on their side.

What brings this historical anecdote to mind is a “history” of catastrophics at the WhyFiles. After listing a series of events that are now considered catastrophic from ancient times to modern, the WhyFiles says this:

[You remember “impact studies”: that ancient discipline which was a paragon of scientific inquiry until Velikovsky single-handedly demolished its respectability.]

Now that the data have become so compelling that catastrophic events can no longer be ignored, the Uniformists need to invade catastrophist territory. But what they wish was uninhabited virgin wilderness turns out to be occupied. After centuries of denial that catastrophic events occur, after volumes written to disparage the idea, after calumnies composed to bury investigations under the headstone of pseudoscience, the invaders are embarrassed by the indigenous catastrophists.

So the indigenes must be eliminated and history re-written to make the invaders into the good guys: Velikovsky is blamed for the centuries of disrepute, and the invaders can claim to have rescued “impact studies” from the depredations of crackpots.

The unsavory truth is that Uniformists since the time of Lyell have done all they could to derogate ideas containing any hint of catastrophism. And they largely succeeded: No scientist would mention catastrophic events or their proponents (else he would quickly find himself no longer a scientist: Where, pray tell, is Gordon Atwater?). Catastrophists were shunned as superstitious crackpots or religious fanatics. No small part of Velikovsky’s greatness was his courage and genius in presenting such a well-researched and well-argued case that the wall of silence was breached, even if only to scream vituperations at him. Had he not done what he did, it’s likely the wall would still be standing, and the ungrateful inhabitants of “impact studies” would be just more crackpots. It was VELIKOVSKY who rescued catastrophics.

These little men who trail far behind Velikovsky and who make snide remarks with fabricated “history” while trying to cash in on his accomplishments are devoid of both grace and gratitude. Such continuing displays of malice are what give science its bad name.

Note: Worlds in Collision is planned to be reprinted later this year on the 50th anniversary of its first printing.