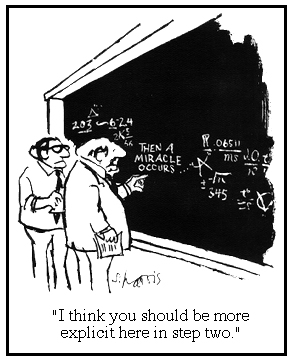 Science has become an international circus. And opening day for “The Greatest Show on Earth” has arrived. In the 27 km main circus ring we have the Large Hadron Collider (LHC) project, starting up after $6 billion dollars and thirty years of development. Before the show the clowns have warmed up the audience with fantastic stories of what we might see. But why should we take clowns seriously?

The BBC Horizon program, “The $6 billion Dollar Experiment,” documents the LHC experiment. The LHC accelerates beams of protons in opposite directions around a circular 27 km underground racetrack and then smashes them together head-on. The expense comes from the need to reach particle energies seven times that of earlier particle colliders and to construct a massive particle detector ‘cathedral’ underground. The energy density reached in the experiment is thought to mimic the earliest moments of the big bang – the origin of the universe.

Most of the experimenters involved are looking for the ‘God particle’. The Times Online reported on April 8:

“The mysterious boson postulated by Professor Higgs, of the University of Edinburgh, has become so fundamental to physics that it is often nicknamed the ‘God particle’. After more than 40 years of research, and billions of pounds, scientists have yet to prove that it is real. But Professor Higgs, 78, now believes the search is nearly over.”

The “God Particle” or Higgs boson was invented by Peter Higgs to explain why other particles exhibit mass. He starts with assuming the existence of a particle that has only mass and no other characteristics, such as charge. So the Higgs particle is like no other in our experience, since all normal matter is composed of electric charges that respond to electromagnetic influences. (Dark matter falls into the same category.) However, we observe that the mass of a charged subatomic particle is altered by the application of electromagnetic forces. At its simplest (and Nature is economical in our experience) it indicates that mass is related to the storage of energy within a system of electric charges inside the particle. That’s what E = mc2 is telling us. So how can a massive particle be constructed without electric charge? It shows the problem inherent in leaving physics to mathematicians — there is a disconnect between mathematical concepts and reality.

The notion that subatomic particles exhibit mass as a result of their interaction with imaginary Higgs particles occupying all of empty space like some form of treacle should have caused a sceptical uproar, if it weren’t for the appalling apathy of the public toward such nonsense. The ‘annihilation’ and ‘creation’ of matter is invoked when particles at particular points arise from ‘fields’ spread over space and time. Higgs found that parameters in the equations for the field associated with his hypothetical particle can be chosen in such a way that the lowest energy state of that field (empty space) is not zero. With the field energy non-zero in empty space, all particles that can interact with the Higgs particle gain mass from the interaction.

This explanation for the phenomenon of mass should have been stillborn if common sense was used. To begin, the annihilation and creation of matter is forbidden by a principle of physics. It is tantamount to magic. Second, field theory is a purely imaginary construct, which may or may not have physical significance. And third, it is not explained how the Higgs particle can have intrinsic mass but no charge and yet interact with normal matter, which has charge but is said to have no intrinsic mass. Rather than explain the phenomenon of mass, the theory serves to complicate and confuse the issue. The most amazing feature of this $6 billion experiment is the confused and illogical thinking behind it.

At the heart of the thinking behind the Higgs boson is quantum mechanics, which has a fundamental flaw — it allows effects without a cause. For example, radioactive decay is unpredictable. We do not know what causes an atom to ‘spontaneously’ decay. Nobel Prize winning physicist Richard Feynman wrote, “…I think I can safely say that nobody understands quantum mechanics.” [The Character of Physical Law, 1965] Quantum mechanics is not physics, whose aim is understanding.

Particle physicists would be well advised to study chemistry and the ‘London force’ between electrically neutral systems of atoms. It is a weak force, sufficient to form solids and liquids, and is always attractive. In other words, it is like gravity. The extreme feebleness of gravity can be understood as the result of tiny distortions of orbiting systems of charge within the proton, neutron, electron and neutrino.

Of course, particle physicists operate by smashing atoms in violent collisions. But if normal matter is composed of subunits of charge in some resonant state of equilibrium (the simplest picture), then smashing particles together will merely generate new unstable (short lived) resonant systems of charge, which will be interpreted as members of a weird zoo of new particles. The LHC can do no more than that. No matter can be created or annihilated. And since the big bang and black holes are the result of the illogical or incorrect application of mathematics to a gravity driven model of the universe, nothing will be learned about either.

The irony of the experiment is that the LHC uses 120 megawatts of electrical power to recreate in a tiny space the presumed conditions that existed shortly after the big bang. But astrophysicists do not recognize the obvious signs of electrical power in space today. It signals a profound disconnect between the ‘specialism’ of theoretical physics and straightforward electrical engineering principles. The eminent historian of ideas, Jacques Barzun, wrote:

“The rampant specialism, an arbitrary and purely social evil, is not recognized for the crabbed guild spirit that it is, and few are bold enough to say that carving out a small domain and exhausting its soil affords as much chance for protected irresponsibility as for scientific thoroughness.”
—Science: the glorious entertainment.

Meanwhile, other circus ‘Big Tops’ have been erected over Gravity Wave Telescopes, built to see waves that don’t exist, and over research establishments of astrophysics and particle physics where it is supposed that 95% of the universe is made of invisible “dark matter” and is powered by undetectable “dark energy.”

”To Hannes Alfvén, the Big Bang was a fable – a fable devised to explain creation. “I was there when Abbé Georges Lemaitre first proposed this theory,” he recalled. Lemaitre was, at the time, both a member of the Catholic hierarchy and an accomplished scientist. He said in private that this theory was a way to reconcile science with St. Thomas Aquinas’ theological dictum of creatio ex nihilo or creation out of nothing.”
— Anthony L. Peratt, ‘Dean of the Plasma Dissidents’, The World & I, May 1988, pp. 190-197.

There is no physics to explain a creation event. Creation is a metaphysical concept. The big bang is a theory created out of nothing. And there is plenty of evidence contrary to the big bang — that shows the universe is not expanding. It is irrational to ignore the evidence or to explain it away, as is being done with dark matter, dark energy, and black holes. Earlier scary performances by circus clowns about black holes gobbling stars frightened the public. Now the public is being assured there’s nothing to worry about if a ‘mini black hole’ happens to be created by the LHC. What seems to be forgotten is that cosmic rays routinely exceed the energy expected from the LHC.

But it is the search for the “God Particle” to explain gravity that reveals the irrationality of the enterprise. The equation of gravity with “God” comes from the belief that gravity controls the universe. It is no more than that — a belief. Plasma cosmology shows the belief is mistaken. It is an ELECTRIC UNIVERSE®, not a gravitational universe. Clearly, the scientists involved in the LHC experiment have no real idea of what they are doing. We are told by one of the participants with a fatuous grin, “science is what you do when you don’t know what you are doing.” The LHC is a mammoth engineering and technological undertaking that I predict will serve in future as a monument to human lunacy.

In 1852, Charles Mackay wrote in the preface to his classic work, Extraordinary Delusions and the Madness of Crowds:

“Men, it has been well said, think in herds; it will be seen that they go mad in herds, while they only recover their senses slowly, and one by one.”

Without a doubt, the modern era of physics will soon be deemed a “dark age of science.” The very language of ‘black hole,’ ‘dark matter,’ and ‘dark energy,’ portends the end of this mad and dismal era.

Scientists today are herded into large institutions. The ones to watch are those leaving or excluded from the herd. A few of them have recovered their senses and are raising a clamor to acknowledge a crisis in cosmology and to return to real physics.

Each group of specialists urges the other to ever more preposterous performances based on their cherished beliefs, while the public pays dearly. But the audience is becoming bored and restless. There is growing doubt that the circus clowns know what they are doing when they talk about “creation” and the “God particle.” When the LHC finds nothing, it will be time to sweep the fertilizer from the main ring and close the circus.