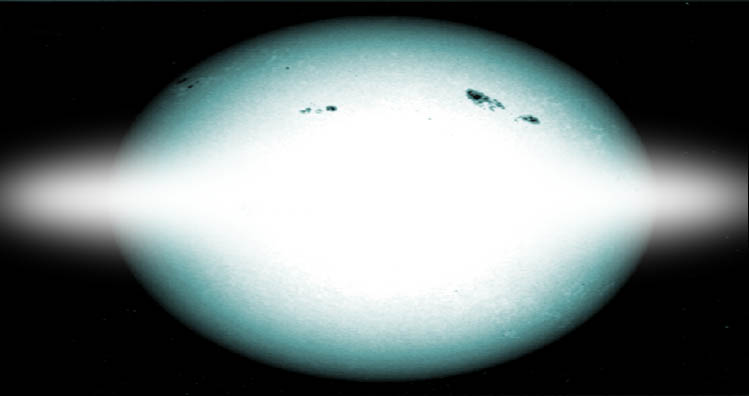 The following report appeared in New Scientist for 12 June 2003:

The flattest star yet seen is forcing researchers to revise their ideas on the dynamics and structure of celestial bodies. The star, called Achernar, was observed by astronomers at the European Southern Observatory in Chile.

According to standard celestial theories, the fast spinning star should be only 20 to 30 per cent wider across its equator than from pole to pole. But Achernar, which spins at 225 km per second, has a colossal bulge around its equator and is 50 per cent wider.

All stars and planets that reach a critical spin velocity bulge slightly at the equator. The Earth is 40 kilometres, or 0.3 per cent, wider from east to west than from north to south. Astronomers had been confident that their calculations of this oblateness were fairly accurate. “But the new observation means that the model for fast rotating stars is not complete,” says astronomer Pierre Kervella, one of the team at the European Southern Observatory. “We clearly do not know enough.” “Either the core is rotating faster than the surface or the star’s matter is circulating in an unexpected way. We’re not sure which possibility is correct at the moment,” he told New Scientist.

The discovery was made by astronomers using the Very Large Telescope Interferometer at ESO’s Paranal site in Chile. This uses two 40-centimetre reflecting telescopes to produce images which are then combined and passed through an interferometer. This permits extremely accurate measurements – the instrument could spot a one euro coin at 2500 kilometres distance.

The astronomers now plan to gather even higher resolution images using a trio of 1.8 metre telescopes. “But our immediate task will be to re-design our computer models,” says Kervella. The team hopes to use the models to distinguish between the two possible explanations for the star’s extraordinary flatness.

Comment: There is a third important alternative, notable for its absence from the discussion. Perhaps we don’t know how stars work! The simplest way to explain stellar flattening due to swift rotation would be if the star were more homogeneous in density. But that would require giving up the notion of a central thermonuclear fire.

Predictive success is a key indicator of the correctness of a theoretical model. The above report demonstrates once more the predictive failure of present astrophysical models. The recommended scientific approach to such a dilemma is to question all of the assumptions that go into the failing model. However, when it comes to the question of how stars work, embodied in the “standard solar model,” there is no question. Stars shine, so obviously something must be burning within the star.

But electric lights shine without consuming themselves.

In the above report, two ad hoc solutions are offered to complicate things. But this is merely tinkering with a model that is already in deep trouble according to other fundamental observations. Unfortunately it seems scientists are encouraged by their training to indulge in “confirmatory bias.” That is, “the tendency for humans to seek out, attend to, and sometimes embellish experiences that support or ‘confirm’ their beliefs.”

“One study found that the vast majority of scientists drawn from a national sample showed a strong preference for “confirmatory” experiments. Over half of these scientists did not even recognize disconfirmation (modus tollens) as a valid reasoning form! In another study the logical reasoning skills of 30 scientists were compared to those of 15 relatively uneducated Protestant ministers. Where there were performance differences, they tended to favor the ministers. Confirmatory bias was prevalent in both groups, but the ministers used disconfirmatory logic almost twice as often as the scientists did.”
– Michael J. Mahoney, Publication Prejudices: An Experimental Study of Confirmatory Bias in the Peer Review System Cognitive Therapy and Research, Vol. 1, No. 2, 1977, pp. 161-175.

Two fundamental observations about the Sun do not support the standard solar model but they have been minimised or ignored.

The first is the celebrated “neutrino problem” where the neutrinos arriving from the Sun are far too few to account for the Sun’s presumed thermonuclear energy output. No scientist could contemplate trashing the standard solar model so the problem had to be with the neutrinos. After decades of expensive research it was shown by the “KamLAND” experiment [see below] that neutrinos can oscillate between different forms, known whimsically as ‘flavors.’ Following the habit of confirmatory bias, this notion was seized upon as “proof” that the standard solar model was correct. A report in Physics Today, March 2003, put it this way: “After 36 years of solar neutrino experiments, the inescapable conclusion is that a large fraction of the electron neutrinos produced by nuclear processes in the Sun’s core are metamorphosing into other neutrino varieties somewhere en route to the detectors on Earth.” The report came to the conclusion that neutrinos were not undergoing any significant change of flavor in the vacuum of space between the Sun and Earth. Instead they were performing “an irreversible flavor change that takes place in high-density regions of the Sun.” So not only does the Sun need a hypothetical hot, high-density core to have any hope of generating thermonuclear energy, it now needs a hypothetical “critical-electron-density region” as well, to fudge the neutrino results. No doubt this will give rise to a flurry of theoretical activity using neutrinos to probe the imagined interior of the Sun.

A widely viewed site on the Internet reported the KamLAND experiment in triumphal terms:

But neutrino metamorphosis is not an “inescapable conclusion.” It is confirmatory bias with bells on! Conflicting evidence about the source region of the neutrinos is being ignored. There have been several reports of a correlation between the neutrino count, the sunspot number and solar wind strength. These are solar surface effects that should have no connection with what is going on in the Sun’s core, where the hidden energy of the nuclear furnace is supposed to take hundreds of thousands of years to “leak out” to the surface.

The electric star model suggests a simpler explanation of solar neutrino observations. The Sun produces all of the neutrino flavors on the surface in more complex nuclear reactions than mere heat and pressure allows. The nuclear reactions are ignited by the plasma pinch effect in the gigantic electrical discharges that cover the star and produce starlight. Ironically, it is the same phenomenon as that employed in some laboratories attempting to mimic the Sun’s energy production! In this model, the connection between neutrino count, sunspot number and solar wind is expected, because the driver for them all is the same – galactic electrical power.

The second serious challenge to the standard solar model comes from solar oscillations. In the 1970’s, the Sun was unexpectedly found to ring like a bell. In 1976 Severny, Kotov & Tsap discovered a dominant 160-minute ringing mode of the Sun. They wrote, “The simplest interpretation is that we observed purely radial pulsations. The most striking fact is that the observed period is almost precisely… the value if the Sun were to be an homogeneous sphere. … We have investigated two possible solutions to this dilemma. The first alternative is that nuclear… reactions are not responsible for energy generation in the Sun. Such a conclusion, although rather extravagant, is quite consistent with the observed absence of appreciable neutrino flux from the Sun, and with the observed abundance of Li and Be in the solar atmosphere.”

The second alternative involved force fitting the data to the standard solar model by assuming that the oscillations were not simply radial but of a more complicated form. However, the implications were so disturbing for theorists that the work was repeated in various locations and all sources of error considered. The result in 1981 was that the original oscillation was found to be the highest peak in the power spectrum, and “one may conclude that 160-min oscillation shows mostly radial motion.” In reporting the status of solar oscillation observations in 1991 in “Solar Interior and Atmosphere”, F. Hill et al mention the 160-minute oscillation without any reference to the implied homogeneous Sun. Rather, they spend half a page casting suspicion on the extensive observations and attempting to minimize its significance. The reason is only thinly veiled; “Additional doubt comes from the difficulty of theoretically describing the nature of the oscillation. …”. The authors were merely behaving with the usual confirmatory bias.

The question of what is ringing the stellar bell has not been satisfactorily answered. It should be noted that the size of an electric star is determined by the degree of electric stress it suffers. And since the electric Sun forms part of a galactic circuit, it will exhibit resonant effects. The Sun is an electric bell as well as an electric light! It seems particularly significant that the 160-minute oscillation also appears with high statistical significance in the solar intensity, infra-red, radio and radio polarization (connected with the solar magnetic field). All of these effects are to be expected in an electric star model because they are driven by the same resonant electrical power circuit.

Kotov went on to publish a paper in 1985 that detailed a number of other significant astrophysical manifestations of this basic 160-minute resonance in the solar system, binary stars and RR-Lyrae variable stars in globular clusters. He concluded, “beyond doubt, ..the nature of the 160-min oscillation, firstly found in the Sun and then in the solar system as a whole and then among the stars, does present a new challenging problem for astrophysics. ..the next thing to suggest is that a fundamental aspect of the physics of gravitation is not yet understood(?).” I suggest that the problem has nothing to do with gravity. Instead, problems arise because incorrect gravitational models are used in astrophysics. The correct electrical models are much simpler and can be verified by direct observations instead of inferences about the hidden interiors of stars.

As outlined in an earlier news item, an electric star is expected to be much the same density throughout. So the peculiar flattening of fast-spinning Achernar is easily understood.

In the not-too-distant future we will look back on attempts to explain the Sun in terms of a central fire with the same dismissive humor that we use for earlier notions of the Sun as some sort of fire in the sky, steadily consuming itself. What appears at first glance a perfectly natural and simple explanation fails to explain almost all of the strange solar phenomena we see. Our old fiery model of the Sun, and consequently of all stars, has become a complicated theoretical nightmare.

It seems that the leap from an old worldview to a new one is difficult for the human mind. But once achieved we can teach young children ideas that defeated the greatest minds for centuries. Our grandchildren will view it as perfectly obvious that Nature should provide us with an electric light, the Sun, powered over galactic distances by a vast network of invisible transmission lines, humming at an ultra-low frequency. Plasma physicists already know those transmission lines as Birkeland currents.