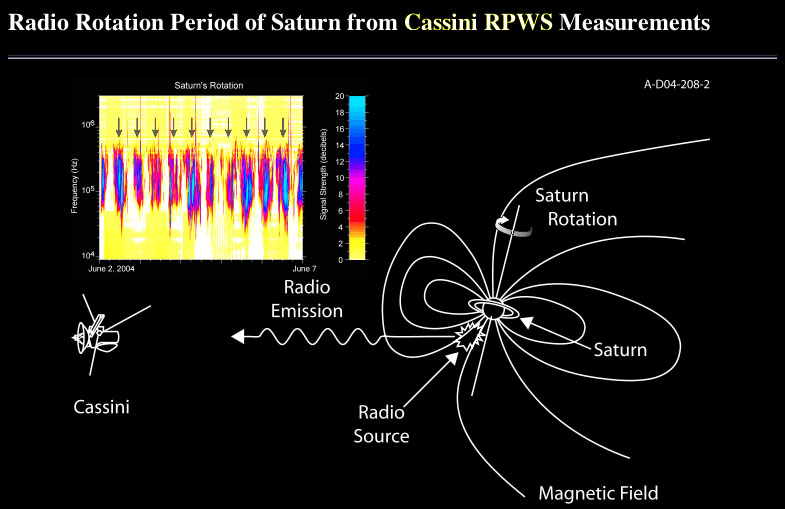 As NASA’s Cassini spacecraft approached Saturn last July it found evidence that lightning on Saturn is roughly one million times stronger than lightning on Earth. “That’s just astonishing to me!” said University of Iowa Space Physicist Don Gurnett, who notes that some radio signals have been linked to storm systems observed by the Cassini imaging instrument. 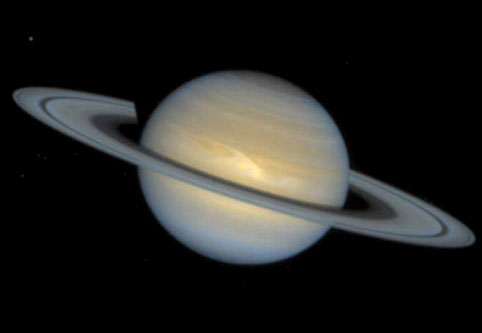 Also, variations in Saturn’s radio rotation rate came as a surprise. Based upon more than one year of Cassini measurements, the rate is 10 hours 45 minutes and 45 seconds, plus or minus 36 seconds. That’s about six minutes longer than the value recorded by the Voyager 1 and 2 flybys of Saturn in 1980-81. Scientists use the rotation rate of radio emissions from the giant gas planets such as Saturn and Jupiter to determine the rotation rate of the planets themselves because the planets have no solid surfaces and are covered by clouds that make direct visual measurements impossible.

Gurnett suggests that the change in the radio rotation rate is difficult to explain. “Saturn is unique in that its magnetic axis is almost exactly aligned with its rotational axis. That means there is no rotationally induced wobble in the magnetic field, so there must be some secondary effect controlling the radio emission. We hope to nail that down during the next four to eight years of the Cassini mission.”

One possible scenario was suggested nearly 20 years ago. Writing in the May 1985 issue of “Geophysical Research Letters,” Alex J. Dessler, a senior research scientist at the Lunar and Planetary Laboratory, University of Arizona, argued that the magnetic fields of gaseous giant planets, such as Saturn and Jupiter, are more like that of the sun than of the Earth. The sun’s magnetic field does not rotate as a solid body. Instead, its rotation period varies with latitude. Commenting earlier this year on the work of Gurnett and his team, Dessler said, “This finding is very significant because it demonstrates that the idea of a rigidly rotating magnetic field is wrong. Saturn’s magnetic field has more in common with the sun than the Earth. The measurement can be interpreted as showing that the part of Saturn’s magnetic field that controls the radio emissions has moved to a higher latitude during the last two decades.”

It seems obvious to propose that a stellar or a planetary magnetic field is a combination of the field due to a rotating charged body and the field due to moving electric currents impinging on that body. The interplay between the two, together with the effects of uneven and moving distribution of charge within the rotating body, gives rise to the complex and changing fields that we observe. This obvious suggestion never gained acceptance because to provide the Earth’s magnetic field, for example, a current of one billion amperes is required. That would imply a tremendously strong electric field at the Earth’s surface, which does not exist. But the fallacy in that argument lies in the use of an idealized electrostatic model with the Earth moving in a perfect vacuum and a zero potential at infinity. The Earth moves in plasma. The clear air electric field of the Earth shows that the Earth is charged. The Earth’s electric field is confined within the Earth’s plasma sheath (double layer) at the magnetospheric boundary. The potential difference between the solar plasma and the Earth is largely confined to the plasma sheath. And certainly the solar plasma is not at zero potential (however that is measured).

One of the best arguments in favor of external electric effects is the surprisingly even distribution of the Sun’s magnetic field lines from pole to pole. It is distinct from a simple dipole field, where the field lines are more concentrated at the poles. Field aligned currents tend to space themselves evenly over the surface of an electrode. So the current flowing into the Sun’s photosphere along magnetic field lines causes the solar magnetic field to be evenly distributed. In other words, the galactic electric current impinging on the Sun controls its magnetism. The enigmatic sunspot cycle and magnetic reversals are therefore strongly affected by the Sun’s galactic electrical environment.

The behavior of sunspots comes from the way electric power is stored in an equatorial plasmoid, or donut, encircling the Sun. Laboratory experiments show that the energy stored in such a plasmoid may be delivered discontinuously to the central body in electrical discharges to high-latitudes. As the input power is increased the discharges move to lower latitudes. On the Sun, those discharges punch a hole through the global electrical storm we call the photosphere to form dark sunspots. The simple fact that sunspots are cool and dark, not hot and bright, demonstrates that the Sun (and all stars) are not powered internally. Nature knew how to make electric lights long before us!

What does this mean for the observations of megalightning on Saturn? Saturn is a body that participates in an electrical discharge with its solar environment. And like the Sun, Saturn stores electrical energy in an encircling plasmoid. In fact, Saturn has two plasmoids. One is outside the rings, the other inside the rings. Discharges to Saturn must cross the rings. The Voyagers arrived at Saturn during solar maximum and witnessed the effect of such “lightning” discharges. Radial Birkeland currents moved material out of the ring plane which then cast shadows on the bright rings to create “mysterious” dark spokes. Cassini reached Saturn at solar minimum so a steady drift of charge is now shunting the electrical energy across the rings. There is no lightning across the rings. Cassini has seen no ring spokes. However, as solar activity increases we may expect to see the ring spokes return.

The last step in the planetary discharge is to Saturn’s ionosphere and atmosphere – causing megalightning. Such powerful lightning punches lower atmosphere matter upwards into the stratosphere where it appears as great white spots and streaks, or storms. That explains the apparent connection between the Saturnian storms and radio signals from the megalightning. 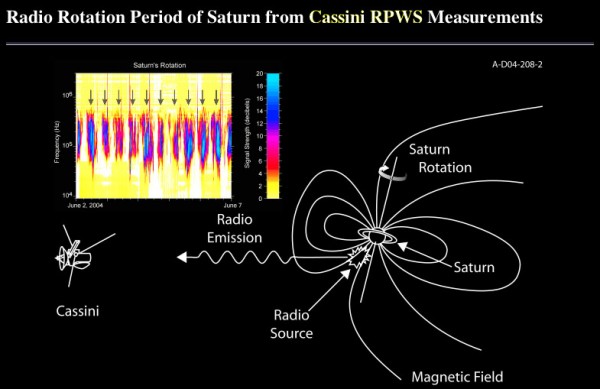 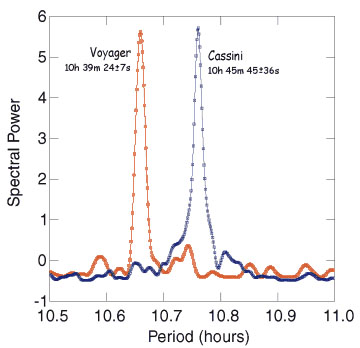 However, it is known that the SKR period is significantly longer than the averaged period for atmospheric features. Just as the Sun is driven fastest at the equator, so the Faraday motor effect of the encircling plasmoid drives Saturn’s atmosphere faster at the equator than at higher latitudes. This mechanism would also account for the striking north-south symmetry of Saturn’s wind systems. It seems that between the Voyagers’ visits in November 1980 and August 1981, and Cassini’s arrival in July 2004, the electrical energy input to Saturn’s Faraday motor has eased and the motor slowed. Saturn’s fierce winds have decelerated at all latitudes along with the rotation of the planet’s magnetic field, to which the source of the SKR seems tied. Saturn’s slowdown is apparent, not real.

It is interesting that the SKR was observed to disappear in the 2 to 3 days following the Voyager 2 encounter. It correlated with the immersion of Saturn in Jupiter’s magnetotail or plasma sheath. Saturn had been temporarily unplugged from its electrical power source!