Io and the ELECTRIC UNIVERSE® 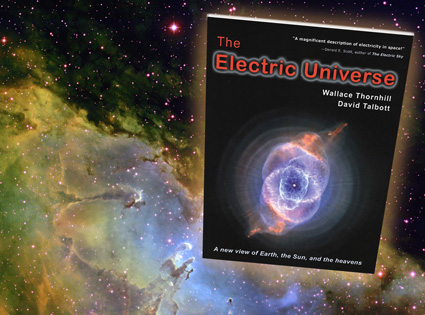 The book is now available from Mikamar Publishing.

“Compelling, highly readable, and superbly illustrated, this book provides a comprehensive introduction to what will surely be the beginnings of a scientific revolution in the years ahead. The ELECTRIC UNIVERSE® understanding eliminates the need for the highly imaginative, sensational yet logic-breaking constructs of black holes, dark matter and energy, and replaces them with laboratory demonstrated plasma phenomena.”

As if to herald the arrival of the book, a series of images of the electric ‘plasma gun’ jet on Io, known to NASA scientists only as the ‘volcano’ Tvashtar, have been released as a brief movie (see below).

The second news item on this website, in October 1999, credited Professor Tommy Gold with predicting in 1979 that the so-called volcanoes on Io are actually the sites of powerful electric discharges. Gold’s view was substantiated in a paper in 1987 by Peratt and Dessler: “Filamentation of Volcanic Plumes on the Jovian Satellite Io” where they showed the filamentation and cross-sectional shape of the plume “is consistent with theories developed from laboratory observation.” Meanwhile “The knots and filaments that allow us to track the plume’s motion are still mysterious” according to NASA scientists. Yet they have had 20 years to acknowledge the contribution from experimental plasma physics! Io’s plumes highlight the dysfunctional nature of specialization in science. We are long overdue for a revolution in science that breaks down the artificial barriers between disciplines. Those barriers have more to do with maintaining exclusive ‘guilds’ than they do with advancing our understanding. A ‘Big Picture’ of our true place in the universe will only be achieved by a synthesis of information from all present disciplines and a forensic style re-examination of information from our past on this planet.

From the NASA caption:

This five-frame sequence of New Horizons images captures the giant plume from Io’s Tvashtar volcano. Snapped by the probe’s Long Range Reconnaissance Imager (LORRI) as the spacecraft flew past Jupiter earlier this year, this first-ever “movie” of an Io plume clearly shows motion in the cloud of volcanic debris, which extends 330 kilometers (200 miles) above the moon’s surface. Only the upper part of the plume is visible from this vantage point – the plume’s source is 130 kilometers (80 miles) below the edge of Io’s disk, on the far side of the moon.

The appearance and motion of the plume is remarkably similar to an ornamental fountain on Earth, replicated on a gigantic scale. The knots and filaments that allow us to track the plume’s motion are still mysterious, but this movie is likely to help scientists understand their origin, as well as provide unique information on the plume dynamics.

Io’s hyperactive nature is emphasized by the fact that two other volcanic plumes are also visible off the edge of Io’s disk: Masubi at the 7 o’clock position, and a very faint plume, possibly from the volcano Zal, at the 10 o’clock position. Jupiter illuminates the night side of Io, and the most prominent feature visible on the disk is the dark horseshoe shape of the volcano Loki, likely an enormous lava lake. Boosaule Mons, which at 18 kilometers (11 miles) is the highest mountain on Io and one of the highest mountains in the solar system, pokes above the edge of the disk on the right side.

The five images were obtained over an 8-minute span, with two minutes between frames, from 23:50 to 23:58 Universal Time on March 1, 2007. Io was 3.8 million kilometers (2.4 million miles) from New Horizons; the image is centered at Io coordinates 0 degrees north, 342 degrees west.

The pictures were part of a sequence designed to look at Jupiter’s rings, but planners included Io in the sequence because the moon was passing behind Jupiter’s rings at the time.

A word of explanation for those who have been frustrated by a lack of news items recently. Firstly I offer the newly published book in recompense. Then there are four conferences being held this year, beginning in June, which have invited me to present aspects of the ELECTRIC UNIVERSE®. In addition, important papers have required editing for publication in August. Meanwhile, the supportive evidence for the ELECTRIC UNIVERSE® pours in relentlessly.