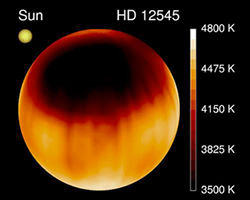 Astronomers were surprised when NASA’s Chandra X-ray Observatory detected an x-ray outburst from a failed star only 60 times more massive than Jupiter.

NASA’s latest observatory, designed to see the most violent and stunning cosmic phenomena, captured something unexpected. The Chandra X-ray Observatory, orbiting in space about one-third of the way to the moon, saw the first-ever flare from what’s known as a brown dwarf, or failed star.

“We were shocked,” said Dr. Robert Rutledge of the California Institute of Technology (Caltech) in Pasadena, CA, the lead author on the discovery paper to appear in the July 20 issue of Astrophysical Journal Letters. “We didn’t expect to see flaring from such a lightweight object. This is really the mouse that roared.”

Comment: On 15 December 1999 I wrote: “All of these puzzles are simply explained by an electric star. There is no lower limit to the size of a body that can accept electric power from the galaxy so the temperatures of small dwarfs will range down to levels conducive to life. The light of a red star is due to the distended anode glow of an electrically low stressed star.” There are no “failed” stars in an ELECTRIC UNIVERSE®. Since the power source for stars is external rather than internal, brown dwarfs can be expected to show most of the same kinds of variability as brighter stars. That includes sudden discharges (flares).

The study of the bright X-ray flare will increase understanding of the explosive activity and origin of magnetic fields of extremely low-mass stars.

Chandra detected no X-rays at all from the object called LP 944-20 for the first nine hours of a twelve-hour observation, and then the source flared dramatically before it faded away over the next two hours.

The energy emitted in the brown dwarf flare was comparable to a small solar flare, and was a billion times greater than observed X-ray flares from Jupiter. The flaring energy is believed to come from a twisted magnetic field. “This is the strongest evidence yet that brown dwarfs and possibly young giant planets have magnetic fields, and that a large amount of energy can be released in a flare,” said Dr. Eduardo Martin, also of Caltech and a member of the team.

For the first 9 hr 36 min of Chandra’s observation, no X-rays were detected from the brown dwarf (left panel). Then the brown dwarf turned on with a bright X-ray flare (right panel) that gradually diminished over the last few hours of the observation. The grainy appearance of the image on the right is due to a shorter exposure time. The bright dots in the background are other X-ray sources, 7 of which have been identified as stars.

Professor Gibor Basri of the University of California, Berkeley, the principal investigator for this observation, speculated that the flare “could have its origin in the turbulent, magnetized hot material beneath the surface of the brown dwarf. A sub-surface flare could heat the atmosphere, allowing currents to flow and give rise to the X-ray flare — like a stroke of lightning.”

LP 944-20 is about 500 million years old and has a mass about 60 times that of Jupiter, or 6 percent of that of the Sun. Its diameter is about one-tenth that of the Sun and it has a rotation period of less than five hours. Located in the constellation Fornax in the southern skies, LP 944-20 is one of the best-studied brown dwarfs because it is only 16 light years from Earth.

The absence of X-rays from LP 944-20 during the non-flaring period is in itself a significant result. It sets the lowest limit on steady X-ray power produced by a brown dwarf, and shows that the million-degree Celsius upper atmospheres, or coronas, cease to exist as the surface temperature of a brown dwarf cools below about 2500 degrees Celsius.

“This is an important confirmation of the trend that hot gas in the atmospheres of lower-mass stars is produced only in flares,” said Professor Lars Bildsten of the University of California, Santa Barbara, also a member of the team.

Brown dwarfs have too little mass to sustain significant nuclear reactions in their cores. Their primary source of energy is the release of gravitational energy as they slowly contract. They are very dim — less than a tenth of a percent as luminous as the Sun — and of great interest to astronomers because they are poorly understood and probably a very common class of objects intermediate between normal stars and giant planets.

Comment: On October 11 1999 I wrote: “… images from Chandra will be important evidence for the ELECTRIC UNIVERSE® because x-rays are only emitted where electrical activity is strongest.” Astrophysicists are unable to interpret the information from Chandra sensibly because their training does not include plasma electrical discharge phenomena. The unfortunate result is “pathological science” that employs magnetic fields that are generated by poorly understood and unseen theoretical “dynamos” inside cosmic bodies. The resulting hypothetical magnetic fields are then trapped in plasma despite the fact that plasma is not superconducting. Then magical “reconnection” of magnetic field lines is invoked to explain sudden energetic outbursts classified as being “like lightning”. If we don’t use magnetic reconnection in storm clouds to explain lightning, why use it in deep space to explain a similar phenomenon?

As further evidence that magnetic models are inadequate, on July 12 the following image was posted on the Astronomy Picture of the Day website.

Explanation: What could cause a star to have such a large spot? Our Sun itself frequently has sunspots, relatively cool dark magnetic depressions that move across its surface. HD 12545, however, exhibits the largest starspots yet observed. Doppler imaging – the use of slight changes in color caused by the rotation of the star – was used to create this false-color image. The vertical bar on the right gives a temperature scale in kelvins. This giant, binary, RS CVn star, also known as XX Trianguli, is visible with binoculars in the constellation of Triangulum. The starspot is thought to be caused by large magnetic fields that inhibit hot matter from flowing to the surface.

Comment: The explanation of sunspots has been contrived to fit the idea of an internally powered star. Common sense suggests that any break in the photosphere should allow the hotter and brighter material beneath to show through. Sunspots should be brilliant blue-white rather than cooler and darker. Once again astrophysicists have invoked magical magnetic fields to “solve” the problem. However, HD 12545 strains the magnetic theory of starspots past breaking point. Where does all of the throttled heat flow go? If it is diverted around this colossal starspot, the edges should be much brighter than the rest of the star.

The electric star model expects this kind of transition between a star like our Sun and a red giant like HD 12545. Bright anode tufting is a feature of mercury arc rectifiers when the current load is high. Anode tufts tend to clump together while retaining their identity. Our Sun is a relatively small stellar anode so the photosphere is densely packed with bright granulations or anode “tufts”. A red giant is a large anode so that “tufting” is not required to carry the current load. As a result, the red anode (chromospheric) glow predominates. A red star with a binary partner may also have an asymmetric anode glow due to a distortion in the current supply created by the partner. Starspots will be cooler because the power that drives the stellar electric discharge is being diverted. Starspots can be any size on an electric star.