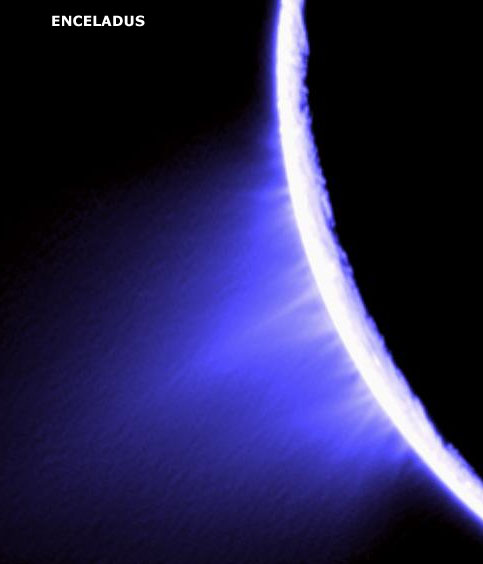 Today the Cassini spacecraft is due to swoop over the south pole of Enceladus, one of the inner moons of Saturn, at a height of 50 km (30 miles), sampling its celebrated south polar plumes. The analyzers will “sniff and taste” the plume. Information on the density, size, composition and speed of the gas and the particles will be collected.

“There are two types of particles coming from Enceladus, one pure water-ice, the other water-ice mixed with other stuff,” said Sascha Kempf, deputy principal investigator for Cassini’s Cosmic Dust Analyzer at the Max Planck Institute for Nuclear Physics in Heidelberg, Germany. “We think the clean water-ice particles are being bounced off the surface and the dirty water-ice particles are coming from inside the moon. This flyby will show us whether this concept is right or wrong.”

According to the usual geological arguments, Enceladus’ plumes require some form of internal heating. Of course, NASA is quick to exploit any suggestion of subsurface liquid water on another body in the solar system as a reason for further missions to look for signs of life. But a source for that heat is not apparent. Susan Kieffer, a geology professor and planetary scientist at the University of Illinois at Urbana-Champaign, observed, “This tiny satellite should be cold and inactive, like our own moon. But it isn’t.” Modeling the maximum heat available from tidal distortion and radiogenic heating from a rocky core fails by an order of magnitude to explain the energy of the plumes. It also fails to explain the concentration of heat at Enceladus’ south pole. So, what if Kieffer’s intuition was correct and Enceladus is “cold and inactive?” Could the measured heat and the energy to drive the plumes come from space?

Kieffer has studied geysers and volcanoes on Earth; on Io, a satellite of Jupiter; and on Triton, a satellite of Neptune. Lumping such disparate phenomena together on the basis of superficial similarities and unquestioned assumptions leads to cognitive dissonance. As argued earlier on this website, there are no volcanoes on Io. Io is subject to extensive and continuous surface ‘machining’ by electric arcs. Jupiter and Io do not form a closed electromagnetic system. Io participates in the electrical circuit between Jupiter and the Sun. Similarly it will be found that Triton, the most distant moon in the solar system, shares in Neptune’s circuit. Assuming by analogy that the jets on Io and Triton are volcanoes or geysers will lead to confusion.

Similarly, it seems that Enceladus is connected to Saturn’s circuitry. There is no need to postulate special and unlikely conditions inside Enceladus to explain its plumes. Like Io, Triton, and Europa in the past, Enceladus is undergoing electric discharge activity on its surface too. The tiny moon is geologically “cold and inactive” because internal geological forces are not driving the plumes. The energy of the plumes is being supplied externally by electricity. This possibility has never entered planetologists’ consciousness due to the astronomical dogma that electricity plays no role in space. Cognitive dissonance is inevitable.

Both Saturn and Enceladus have surprisingly ‘hot’ south poles. Planetary scientists can see no connection. The vast disparity in size and lack of appreciable atmosphere on Enceladus renders comparisons seemingly pointless. However, more surprising was the discovery that Saturn has a hot spot at its north pole, which has been in darkness for 13 years. But a greater mystery within that enigma is a hexagonal feature inside Saturn’s auroral discharge. I explained in January, “The polar hot spot and long-lived hexagonal feature result from a continuous electric current flowing from the Sun into the pole of Saturn. The hot spot will remain for as long as the Sun shines electrically.” Now, what do we find encircling the ‘hot’ south pole of Enceladus but another polygonal feature.

I further explained, “The blue (false color) auroral ring shows that the current flows into Saturn via a cylindrical electron beam propagating along Saturn’s magnetic field and magnetically pinching (known as a Z-pinch) down to the polar region.”

Clearly, the polygonal south polar terrain (SPT) on Enceladus is the result of a recent intense auroral-type discharge. The bluish ‘discharge streamers’ can then be understood as channels carved by surface lightning streaking away from the current vortexes toward the north pole. There, electrons leaving Enceladus to complete the circuit would produce extensive cathode cratering. And the north pole of Enceladus is heavily cratered. The near surface currents would heat the ice and soften or erase earlier craters.

“The interior of the SPT is characterized by a complex network of cross-cutting fractures. Most conspicuous is a family of roughly parallel lineaments that we informally term ‘tiger stripes.’ The tiger stripes are linear depressions, typically about 500 m deep, 2 km wide, and 130 km in length, flanked on both sides by prominent 100-meter-high ridges. Darker material extends a few kilometers to either side.” There are also “Narrow deposits of spectrally distinct icy material that often thread along the valley floors.” “Tiger stripes have sharp relief and cross-cut all other fractures in their path.”

Similar discharge channels can be seen on Jupiter’s moon Europa, complete with coloration of the material excavated and thrown to both sides of the channel. A close-up of the tiger stripe terrain (4m/pixel) shows large ice boulders strewn about. Also in the closest image, narrow darker deposits “thread along the valley floors.” These threads trace the path of the subsurface lightning with material altered by the energy of the discharge. Some of the altered material is usually responsible for the coloration of the levees to either side. On both Io and Europa the reddish coloration is due to the ‘fritting’ of two oxygen atoms from water ice to form a sulfur atom. On Enceladus, the energy of the discharge seems to be insufficient to allow this particular nuclear transmutation; otherwise sulfur would be present in the plumes.

Geological dogma leads planetary scientists into confusion over dating as well as over mechanisms:

“the derived absolute ages for terrains on Enceladus from crater counts strongly indicate geologic activity over a time span of more than 4 billion years up to the present. Ages within the SPT are possibly as young as 500,000 years or younger. The discrete ages of different terrains suggests that rather than being continuously active through geologic time, Enceladus experienced localized episodes of activity perhaps separated by much longer time periods of inactivity.”

As argued at length in More on Mercury’s Mysteries, crater statistics tell us nothing about the age of a planetary surface. Almost all craters are electrical scars, generated suddenly and intermittently. So all that can be deduced is that the SPT is younger than the nearby surface. We cannot assume that all bodies in the solar system were formed more than 4 billion years ago. “Geologic time” is a worthless fiction that is clung to because it allows theoretical extrapolations over vast time spans and consequently a facade of scientific rigor. The only supportable official statement is that “Enceladus experienced localized episodes of activity perhaps separated by much longer time periods of inactivity.”

Returning to the “sniffing and tasting” of the polar plumes, officially “there are two basic possibilities for the source of the jets: either sublimating ice, above or below ground, or underground reservoirs of boiling liquid erupting through vents in the tiger stripes.” The boiling liquid model is preferred because it is easier to explain a wider size range of particles from a liquid than a sublimating solid. But the boiling model has severe problems in explaining a heated reservoir beneath the surface and the formation of vents of the precise character required to produce the observed jets.

On 14 July 2005 Cassini was lowered to a close-approach distance of 168 km. The encounter produced unequivocal evidence of a plume of water vapor and small icy particles emanating from the south polar region of Enceladus. Surprisingly, the Ion and Neutral Mass Spectrometer (INMS) found that if the mass-28 species is CO rather than N2, then the outgassing observed from the plume would have a composition that is remarkably close to that of comets. Also the very narrow size distribution of particles fed to the E-ring by Enceladus is remarkably close to that of comets. This finding favors the electric discharge sputtering mechanism. It is precisely that mechanism that operates on comet nuclei to produce jets and that produced expressions of surprise when the fineness and limited size distribution of comet dust was first measured. Dr. Torrence Johnson, imaging team member from NASA’s Jet Propulsion Laboratory (JPL) in Pasadena, had the answer intuitively when he said in December 2005, “In some ways, Enceladus resembles a huge comet.” But then cognitive dissonance took over, “Only, in the case of Enceladus, the energy source for the geyser-like activity is believed to be due to internal heating by perhaps radioactivity and tides rather than the sunlight which causes cometary jets.” On the contrary, using Ockham’s razor, one simple model should explain them all.

The “other stuff” found in some of the ice particles may be composed of atoms formed by nuclear modification of hydrogen, oxygen, carbon and nitrogen, detected by INMS. Even CO may be a product of a nitrogen molecule, N2, under these conditions. If the “other stuff” can be analyzed, it may provide the identity of the blue coloration of the tiger stripes.

Electric discharge machining of planetary surfaces is the most powerful sculpting force in Nature. Until planetary scientists recognize this fact they will continue to be surprised and puzzled by images and data returned from other bodies in the solar system.