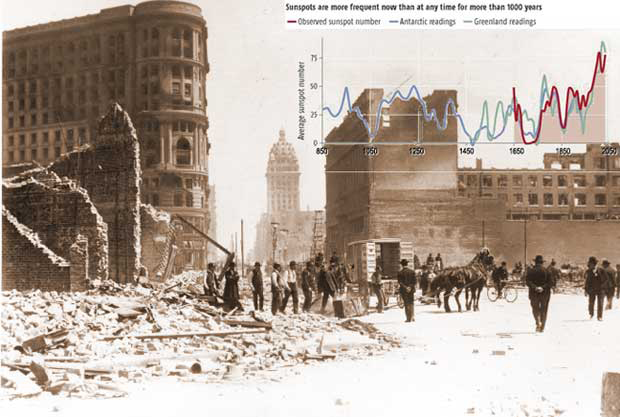 Some scientists have become aware of a correlation between sunspots and Earthquakes and want to use the sunspot data to help predict earthquakes. The theory is that an intensification of the magnetic field can cause changes in the geosphere. The NASA and the European Geosciences Union have already put their stamp of approval on the sunspot hypothesis, which suggests that certain changes in the sun-earth environment affects the magnetic field of the earth that can trigger earthquakes in areas prone to it. It is not clear how such a trigger might work.

In the Journal of Scientific Exploration, Vol. 17, No. 1, pp. 37–71, 2003, there is an excellent report that addresses the more down-to-earth problems facing geophysicists trying to understand earthquakes. The paper is titled, Rocks That Crackle and Sparkle and Glow: Strange Pre-Earthquake Phenomena, by Dr. Friedemann T. Freund, a professor in the Department of Physics, San Jose State University, and a senior researcher at NASA Ames Research Center. Dr. Freund writes:

“Many strange phenomena precede large earthquakes. Some of them have been reported for centuries, even millennia. The list is long and diverse: bulging of the Earth’s surface, changing well water levels, ground-hugging fog, low frequency electromagnetic emission, earthquake lights from ridges and mountain tops, magnetic field anomalies up to 0.5% of the Earth’s dipole field, temperature anomalies by several degrees over wide areas as seen in satellite images, changes in the plasma density of the ionosphere, and strange animal behavior. Because it seems nearly impossible to imagine that such diverse phenomena could have a common physical cause, there is great confusion and even greater controversy.”

“Based on the reported laboratory results of electrical measurements, no mechanism seemed to exist that could account for the generation of those large currents in the Earth’s crust, which are needed to explain the strong EM signals and magnetic anomalies that have been documented before some earthquakes. Unfortunately, when a set of observations cannot be explained within the framework of existing knowledge, the tendency is not to believe the observation. Therefore, a general malaise has taken root in the geophysical community when it comes to the many reported non-seismic and non-geodesic pre-earthquake phenomena. There seems to be no bona fide physical process by which electric currents of sufficient magnitude could be generated in crustal rocks.”

Freund makes an excellent attempt to explain all of the phenomena in terms of rock acting like a p-type semi-conducting material when placed under stress. Normally rock is a good insulator. For example, the emission of positive ions from the Earth’s surface may act as nuclei for the ground-hugging fog that sometimes occur prior to earthquake activity. And although the surface potential may only be in the 1–2-Volt range, the associated electric field across a thin surface layer can reach hundreds of thousands of volts per centimeter, enough to cause corona discharges, or “earthquake lights.” Thermal anomalies seen from space before an earthquake may be due to the emission of infra-red light where the semi-conductor charge recombines at the surface. Disturbed animal behavior may be due to the presence of positive ions in the air.

As Freund says, this theory places an explanation in the realm of semiconductor physics, which means that geoscientists are not the best people to judge it. That explains why the paper appears in a speculative journal. Freund laments, “the peer review system often creates near-insurmountable hurdles against the publication of data that seem contrary to long-held beliefs.” Freund has identified a source of charge in stressed rocks that was not believed possible. He says, “once fully told and understood, the ‘story’ [of p-holes] is basically so simple that many mainstream geoscientists are left to wonder why it has taken so long for them to be discovered. If they are so ubiquitous as they appear to be, why did p-holes go unnoticed for over a hundred years?” Confronted with this question, by a twist of logic, many ‘mainstreamers’ succumb to the impulse to reject the p-hole concept out of hand. Other geologists find it hard to believe that positive holes liberated so deep down could flow to the Earth’s surface and collect there without being reabsorbed. However, earthquake lights are a real phenomenon, and some kind of mechanism must be creating them. Whatever it is, says Chris Marone, who works on the physics of rock deformation at Pennsylvania State University in University Park, it will involve maintaining charge over surprisingly large distances. “This is a very, very hard problem.”

The difficulties encountered in connection with p-holes are similar to others that have punctuated the history of science. The discovery of the p-holes as dormant yet powerful charge carriers in the Earth’s crust calls for a new paradigm in earthquake research and beyond. More often than not, any call for a new paradigm elicits opposition. Freund closes with a quote from the philosopher Arthur Schopenhauer:

“all truth passes through three stages. First, it is ridiculed. Second, it is violently opposed. Third, it is accepted as being self-evident.”

If Freund has a problem getting such a simple idea accepted, how much more difficult is it going to be to get both astronomers and geoscientists to accept that the Earth is a charged body in an ELECTRIC UNIVERSE®?

The missing link between the sunspots and earthquakes is the fact that the electric discharges to the Sun that cause sunspots can also affect the Earth’s ionosphere. The ionosphere forms one “plate” of a capacitor, while the Earth forms the other. Changes of voltage on one plate will induce movement of charge on the other. But unlike a capacitor, the Earth also has charge distributed in rock beneath the surface. And if the subsurface rock has become semi-conducting because of stress, there is an opportunity for sudden electrical breakdown to occur through that rock. We should expect similar processes to occur underground as is found in atmospheric lightning. There will be precursor electromagnetic effects due to the small-scale travelling of charge – rather like “stepped leaders” between cloud and ground. That may be the limit of activity in small tremors. But in a large earthquake, the entire circuit may be involved, from below the Earth, through the atmosphere to the ionosphere. This would explain the massive disturbance of the ionosphere over a large area accompanying a major earthquake.

The mystery of the source of the current is solved – it comes from a charged Earth. And the link with sunspots via the ionosphere is exposed. Subterranean lightning causes earthquakes! Seismic waves are the rumble of underground thunder. The energy released may be equivalent to the detonation of many atomic bombs but only a small proportion need come from the release of strain in the rocks. Most of it comes from the Earth’s stored internal electrical energy.

The latest issue of the IEEE journal, SPECTRUM, features an article based on Freund’s work that looks at ways of predicting earthquakes. Once again, it seems that scientific advances fare better today in the hands of electrical engineers.
See www.spectrum.ieee.org/dec05/2367.

There is a corollary to this story, which concerns the mysterious fragmentation of comets. The observation of more than 20 cases of comet fragmentation led to the thought that comet nuclei are poorly cohesive rubble piles. But comet nuclei that have been imaged closely show that they are cohesive, rocky bodies with sharp relief (notwithstanding theoretical speculations about their origin from dust and erroneous densities derived from gravitational theory). Comet Tempel 1 was no exception yet surprising quantities of extremely fine dust were seen in the Deep Impact experiment. The dust came from electrical sputtering of the rocky comet surface. An impact will dislodge much larger particles.

So, being rocky bodies like the Earth and in the same electrical environment of the solar system, comets will carry significant electrical charge distributed throughout the nucleus. However, unlike the Earth, conducting plasma is in contact with the comet nucleus so that electrical discharges reach right down to the surface where they are concentrated in cathode jets, seen emanating from the nucleus.

The rocks in the comet nucleus are not under mechanical stress so they are good insulators. However, the increasing loss of charge from the surface of the comet nucleus, as it rushes toward the Sun, develops electrical strain within the nucleus. If a subsurface discharge results, the comet suffers a “cometquake,” which may disrupt the nucleus. The small velocities imparted to rocks by the quake are sufficient for them to escape the gravity of the nucleus.