CLOSEST EVER PICTURE OF IO 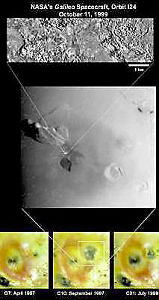 The highest resolution image ever of Jupiter’s volcanic moon Io, (the black and white image at top) was taken by NASA’s Galileo spacecraft on Oct. 11, 1999, from an altitude of 617 kilometers (417 miles). It shows an area about 7.2 kilometers (4.5 miles) long and 2.2 kilometers (1.4 miles) wide. Features as small as 9 meters (30 feet) can be discerned, providing a resolution which is 50 times better than the image taken by the Voyager spacecraft in 1979. The box drawn in the center image, a Galileo image of Io taken earlier in the mission, shows the area displayed in the new image at top. The three color images below show the volcanic region from a much higher altitude than the other images and follow a volcanic eruption.

This new image targeted lava flows that erupted from the volcano Pillan. A complex mix of smooth and rough areas can be seen with clusters of pits and domes, many of which are the size of houses. The volcanic features are similar to those found on Earth and Mars. However, this combination of different types of lava flows has not been seen before in such a small area, demonstrating the variety of volcanic processes that continue to change the surface of Io.

… In the electrical model, the clusters of pits and domes are not volcanic. As expected in an ELECTRIC UNIVERSE®, chains of circular craters show that an electric discharge has moved across the surface of Io. Such crater chains are characteristically found on cathode surfaces as the arc jumps from the neat, circular crater it has just burnt to the nearest high point – often the rim of the same crater. The mounds also are most likely “fulgamites” – the kind of raised blisters found on lightning arrestors after a lightning strike. The movement of Io’s so-called volcanoes of over 100km in a few years is also more easily understood as a travelling arc. Features on Mars are similar because they too were caused by interplanetary discharges in the recent past.

Galileo’s camera and near-infrared mapping spectrometer measured the temperatures of the lavas during the eruption and found that they were hotter than any known eruption on Earth in the last two billion years.

… It was the temperature of the cathode arcs that was being measured, averaged over a large area. Better resolution will show that Io’s hot spots are far too hot to be volcanic. They will be found to be made up of multiple smaller spots at temperatures of many thousands of degrees – temperatures found in an electric arc.

URL for the news item and image is http://science.nasa.gov/newhome/headlines/ast24oct99_1.htm [In 2012 this link is dead, go to link below]