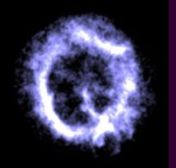 The ELECTRIC UNIVERSE® provides the answer.

In 1980 David Talbott published The Saturn Myth. In it he noted that the cosmic wheel is a universal motif used by all ancient peoples when describing the primordial sky. What in heaven could it mean?

His research showed that within human memory Saturn, Venus and Mars towered above the Earth in a great planetary polar conjunction. Incredible as it may sound, the evidence is so specific that Talbott was prepared to stake everything on the evidence although at that time he knew there was no way that astronomers would allow it, based on their training.

The cosmic wheel that the ancients drew identified the planet Venus with spokes or fiery streams radiating across the face of Saturn.

Those spokes are the characteristic signature of a radial electric discharge in the near vacuum of space where the “spokes” follow the magnetic field lines between Saturn and Venus. Venus must have been beneath the pole of Saturn to form such a pattern. The picture shows Venus and Mars superimposed on a plasma focus discharge and was presented to an international conference in Portland, Oregon in January 1997. I wrote then: “The number of ‘radiating streams’ would increase under increasing electrical stress. Laboratory experiment has shown that the three and four rayed streams are the preferred stable forms of such a plasma discharge. The streams would rotate with Saturn’s rotation, following the planet’s magnetic field lines, giving a bent swastika or 3 legs-o-man appearance.” One example of an early representation of the cosmic wheel is shown on the left of the image.

The Chandra satellite has now confirmed that a cosmic wheel can be formed in space by a toroidal plasma discharge. Although this was known from laboratory experiments it remains unrecognized by astronomers. (Hence the NASA report describes the spokes as “puzzling” and the concept of “multi-million degree” temperatures is inappropriate in an electric discharge). Further images from Chandra will be important evidence for the ELECTRIC UNIVERSE® because x-rays are only emitted where electrical activity is strongest. That is, in supernovae, active galaxies and the coronae of stars.

There is one additional feature in the Chandra image worthy of mention. The cosmic wheel of legend sat atop a writhing pillar of light, or world mountain. Such axial projections are also characteristic of toroidal plasma discharges. I suggest that is precisely what the bright twisted thread is at 5 o’clock in the Chandra image.