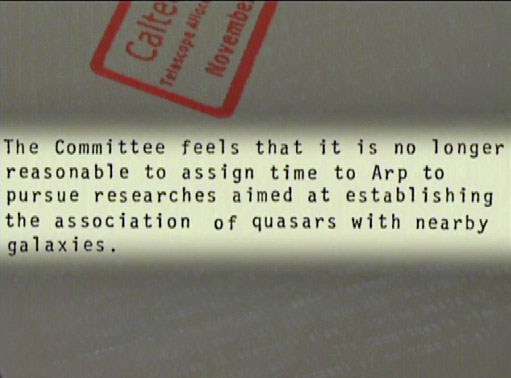 Astronomy has little to celebrate in 2009!

However, astronomers have little to celebrate in 2009. They have usurped the role of the church and cast out a modern-day Galileo!

Astronomers are repeating the mistakes of the Roman Catholic Church in Galileo’s day by refusing to accept what telescopes are showing them. The fear is the same — of having cherished dogma swept away, and with it their authority. It seems to be the nature of authorities to nurture and perpetuate self-serving myths.

Dr. Halton Arp is a modern ‘Galileo,’ in our midst. He was regarded in his early career as a leading young astronomer, but he made the poor career move of proving the Big Bang never happened. Like Galileo, he did this by diligent observation. He showed that Edwin Hubble’s intuition about the nature of the universe was simple and correct:

“..if redshifts are not primarily velocity-shifts, the picture is simple and plausible. There is no evidence of expansion and no restriction of time-scale, no trace of spatial curvature, and no limitation of spatial dimensions.”
— Edwin Hubble, Observational Approach to Cosmology, Oxford 1937.

However, theoretical physics, since the time of Einstein, seems to have developed a penchant for religiosity (seeing “the face of God” in an equation or in the Cosmic Microwave Background radiation). We are expected to believe that which can’t be detected. Meaningless terms and phrases (the fabric of space time, the Big Bang) punctuate a new secular catechism. And at the heart of modern cosmology is a miraculous creation story. The “theory” of the Big Bang is not science.

“Certain results of observational cosmology cast critical doubt on the foundations of standard cosmology but leave most cosmologists untroubled. Alternative cosmological models that differ from the Big Bang have been published and defended by heterodox scientists; however, most cosmologists do not heed these. This may be because standard theory is correct and all other ideas and criticisms are incorrect, but it is also to a great extent due to sociological phenomena such as the ‘snowball effect’ or ‘groupthink’. We might wonder whether cosmology, the study of the Universe as a whole, is a science like other branches of physics or just a dominant ideology.”
—Martin Lopez-Corredoira, astrophysicist.

Astrophysicist Michael Disney writes in The Case Against Cosmology:

“…the word ‘cosmologist’ should be expunged from the scientific dictionary and returned to the priesthood where it properly belongs.”

But reassigning cosmology from the astronomical priesthood to the religious priesthood would solve nothing. They were never really separate. For example, physicists like Paul Davies, author of God and the New Physics and The Mind of God, receive the £1,000,000 Templeton Prize. Until 2001 the name of the prize was Templeton Prize for Progress in Religion! The miraculous creation story of the Big Bang originated from the Belgian Roman Catholic priest and scientist Monsignor Georges LeMaître. The ELECTRIC UNIVERSE® argues that if we want real answers, cosmology should follow in the distinguished steps of the Scandinavians Kristian Birkeland and Hannes Alfvén and be in the practical hands of electrical engineers and plasma experimentalists—not mathematical theorists. And since the ELECTRIC UNIVERSE® is an interdisciplinary synthesis including human observations of the sky stretching back into prehistory, it uncovers the origin of astronomical priesthoods. Once that is assimilated into our collective consciousness we will have a basis for rational cosmology and spirituality.

Cosmology today, like that in Galileo’s day, is a state-run enterprise. The outcome is the same—dominance of science, its politics and education, by a few dogmatic “cardinals” of science. So, despite technological marvels, astronomy in 2009 is in the grip of a modern “dark age,” ironically reflected in physically meaningless terms like “dark matter,” “dark energy,” and “black holes.” It is long overdue to turn on the electric light!

“When looking at this picture no amount of advanced academic education can substitute for good judgment; in fact it would undoubtedly be an impediment.”
—Halton Arp, Seeing Red.

Chandrasekhar did not have the courtesy to send Arp’s paper to independent referees. Clearly, “imagination” is Chandrasekhar’s codeword for “belief” because Arp’s observation of discordant redshifts of connected objects in deep space strikes at the belief in the redshift-distance assumption. Arp’s observations show that the universe is, as Hubble thought, essentially static, ageless and infinite. The miraculous big bang never occurred. Despite all the hubris and ballyhoo, we are ignorant of how the universe came into being.

Chandrasekhar, described by Arp as “an incomprehensible theoretician,” was awarded the Physics Nobel prize in 1983 for his whimsy on the gravitational collapse of stars. From this flight of mathematical fancy, based on a simplistic self-gravitating gas model of stars, has come a science fiction menagerie of neutron stars, quark stars, strange matter stars and black holes. Invalid, unintelligible theory is the foundation of modern gravitational cosmology, but it wins Nobel Prizes.

“The greatest mistake in my opinion, and the one we continually make, is to let the theory guide the model. After a ridiculously long time it has finally dawned on me that establishment scientists actually proceed on the belief that theories tell you what is true and not true!”
—Halton Arp, Seeing Red.

It is nonsense to believe that a star can collapse, given the ignorance of what an electric star is, and what gravity really is and how it relates to the electrical structure of matter. For reasons unknown, Nature has contrived to have the units of charge, positive and negative, carried by particles (the proton and electron respectively) whose gravitational mass differs by a factor of nearly 2,000 times. Out of this simple difference grows the wonderful complexity of plasma behavior and the ELECTRIC UNIVERSE®. Amongst other things, it means that neutral matter in a gravitational field will exhibit electric dipole behavior that assists charge separation and resists gravitational collapse.

A choice is presented, as once before in the days of Copernicus, between a strangely small, finite universe and a sensibly infinite universe plus a new principle of nature.
—Edwin Hubble, conclusion of The Problem of the Expanding Universe. American Scientist, Vol. 30, No. 2, April 1942.

There is no choice! The evidence that the universe is not expanding has been available for decades. Hubble’s “new principle of nature” is not new. But it requires “letting go” of some things we “know” that simply aren’t so. Quasars are not faint, their light redshifted and star-like, because they are very distant and moving rapidly away from us. Arp has shown that quasars are nascent galaxies, born from the central nucleus or ‘womb’ of nearby active galaxies. They are born at high velocity with faint and highly redshifted light. As they age, their brightness and mass increases, their intrinsic redshift decreases in quantum steps, and their velocity decreases until they become a companion galaxy of their parent.

Intrinsic redshift is quite distinct from “tired light” or interaction with intervening particles. The decreasing quantized redshift of the light from a quasar shows that the quasar’s increase in mass occurs resonantly at the subatomic particle level. (Einstein intuited correctly, I believe, that quantum behavior requires a resonant structure within subatomic particles). It throws into sharp relief how a belief that the masses of the proton and the electron are universally fixed can shackle progress. Yet such a belief has been allowed to flourish when there is no knowledge of the relationship of matter to mass. Homo sapiens sapiens proves to be homo sapiens ignoramus!

Luckily for progress there are always individual exceptions to this general observation about humanity. I consider that Arp’s following remark will prove to be prescient:

“…if it turns out that mass is primarily a phenomenon of frequency, that means we might affect it by subtle wave and resonance interventions. If we live in a Machian universe, the atoms in our bodies are in communication with the far universe. If our matter was materialized from a previously diffuse state we carry the information of an enormously complex pattern that is somehow connected with everything else.”
—Halton Arp, Seeing Red

In an ELECTRIC UNIVERSE® we are not isolated, disconnected and alone.

“The observers come in now with the belief that we live in a big bang universe and therefore all of their ways of understanding things are tailored to that and they don’t come in with the possibility that there are alternatives.”
—Geoffrey Burbidge, Universe: The Cosmology Quest DVD.

A final word on this subject from Arp:

“One lesson from all of this, which seems obvious, is that scientists have to be absolutely honest and straightforward with the public, the people who are paying their salary. Their primary moral obligation is to report the facts and make available a range of interpretations. They have no paternalistic excuse to guard the public from ‘misunderstandings’ or ‘alarm.’ If they cannot explain a matter so that a non-specialist can understand it, they don’t understand it themselves and should not cover up this important situation.”
—Halton Arp, Seeing Red

Meanwhile, the ELECTRIC UNIVERSE® has plenty to celebrate in 2009.