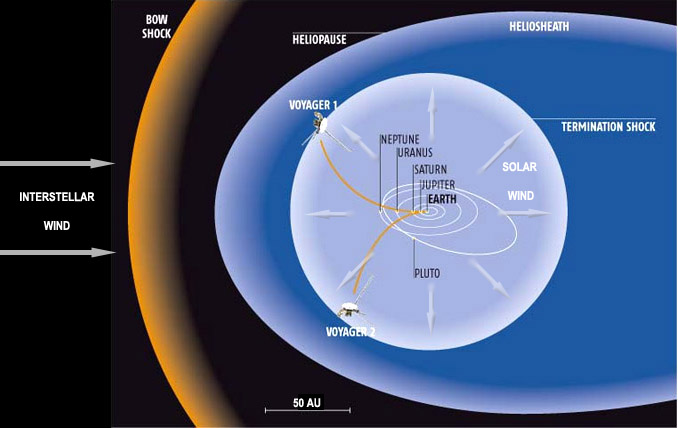 “The observations that are not explainable by current scientific theories are the most valuable, for they may propel the field forward in the next cycle of innovation, possibly to a paradigm shift.”
– Don L. Jewett, What’s Wrong With Single Hypotheses? –It’s time to eschew enthrallment in science, The Scientist, Volume 19, Issue 21

It’s official! In Science magazine of September 23 are reports that Voyager 1 has passed an important milestone. The spacecraft, at more than 94 times the distance of the Earth from the Sun, has “crossed the termination shock,” where the solar wind is supposed to slow down before merging with the local interstellar medium.

As usual, all is not well with this picture. In a commentary, Len Fisk of the University of Michigan summarized the reports in Science: “Once again the mantra of space exploration is fulfilled: When we go somewhere that is new, we find the unexpected” Is this because astrophysicists work with a single hypothesis – of an electrically dead universe?

The terminology used when describing the diagram above sounds more relevant to supersonic aircraft in our electrically neutral atmosphere than it does to the ionized and magnetized solar environment. There is no acknowledgement that only electric currents generate magnetic fields. It is a false doctrine in astrophysics that magnetic fields can be “frozen in” to plasma. Hannes Alfvén, the father of plasma physics, pointed this out in his Nobel Prize acceptance speech in 1970! It should, at least, have formed the basis of a second working hypothesis that acknowledged an electrical dimension to the problem. But scientists often don’t follow their own rules of “best practice.”

The problem of sticking with a single hypothesis was noted as long ago as 1897 by T. C. Chamberlin in the Journal of Geology, “Studies for students: the method of multiple working hypotheses.” He wrote:

“The moment one has offered an original explanation for a phenomenon which seems satisfactory, that moment affection for [one’s] intellectual child springs into existence, and as the explanation grows into a definite theory [one’s] parental affections cluster about [the] offspring and it grows more and more dear … There springs up also unwittingly a pressing of the theory to make it fit the facts and a pressing of the facts to make them fit the theory…”

This is the pattern of astrophysics.

Once established, the belief in and affection for one’s intellectual child seems to override considerations of commonsense and sometimes the principles of physics. Not surprisingly, there is a marked lack of interest in “killing” one’s “intellectual child.” Yet searching for alternative hypotheses and devising crucial tests is supposed to be the cornerstone of good science. Instead, when confronted with discordant data, the existing model is usually bent to fit or we are told that the problem will be fixed real soon. There are myriad problems in astrophysics waiting for a solution. We rarely hear about them. We see instead science-fiction headlines like today’s: “Phantom energy may fuel universe-eating wormhole.” [New Scientist 11/11/2005].

There is an alternative hypothesis about what we will find at the outer limit of the Sun’s domain. It has had plenty of time to percolate its way into the consciousness of astrophysicists, if they cared to look up from their mathematical computer models.

In a paper, supported in part by NASA, Alfvén writes:

“Since the time of Langmuir, we know that a double layer is a plasma formation by which a plasma–in the physical meaning of the word–protects itself from the environment. It is analogous to a cell wall by which a plasma (in the biological meaning of the word) protects itself from the environment.
“If a plasma is inhomogeneous so that the chemical composition, density, and/or electron temperature differs in different parts of the plasma, the plasma may set up double layers which split the plasma into two or more regions, each of which becomes more homogeneous.”
[IEEE Transactions on Plasma Science, Vol. PS-14, No. 6, Dec 1986.]

In the above paper, Alfvén did a study of the most used textbooks on astrophysics and how they treated important concepts such as double layers, critical velocity, pinch effect and circuits. He found that:

“students using these textbooks remain essentially ignorant of even the existence of these concepts, despite the fact that some of them have been known for half a century (e.g., double layers, Langmuir, 1929; pinch effect, Bennet, 1934). [Make that three quarters of a century now.] The conclusion is that astrophysics is too important to be left in the hands of astrophysicists who have gotten their main knowledge from these textbooks. Earthbound and space telescope data must be treated by scientists who are familiar with laboratory and magnetospheric physics and circuit theory, and of course with modern plasma theory.”

The solar plasma and that of interstellar space are two different plasmas, which must therefore have a “double layer” or Langmuir plasma sheath between them. So to treat the heliospheric boundary simply as a magnetohydrodynamic shock problem is naïve. A second hypothesis to be considered when looking at the data from Voyager 1 is that the spacecraft is entering the Sun’s plasma sheath, which is protecting it and the planets from the interstellar environment. There is a very important reason for submitting this second hypothesis to rigorous tests. It is crucial to the electric Sun model. If the Sun is the local focus of a galactic discharge then the heliospheric double layer forms the “virtual cathode” to the Sun’s corona discharge current. Almost the entire voltage drop between the Sun and the interstellar plasma will occur across this distant plasma sheath.

What things should we be looking for from Voyager 1? A double layer forms part of an electric circuit. It carries current and has regions of positive and negative charge density between which is a strong electric field. Alfvén notes some important properties of a double layer:

1. it very often, perhaps always, produces noise and fluctuations. The noise production is often associated with strong currents through plasmas.
2. it broadens the energy spectrum of electrons.
3. the noise is often incorrectly called ‘turbulence.’ It is such an important property of plasmas that theories which do not take it into consideration run some risk of being irrelevant.

What has Voyager 1 found in its new environment?

From the report in Science:

1. “All the observations support a shock crossing. The magnetic field strength increased as a result of the compression at the shock, and there was a change in the properties of the turbulence; there were plasma waves characteristic of shock crossings; and the intensity of low-energy particles increased abruptly.

2. It was the finding that anomalous cosmic rays (ACR’s) were unaffected by the termination shock that was the biggest surprise. ACR’s are thought to be produced by neutral atoms in interstellar space that:

The surprise concerning ACR’s is of cosmological importance because it throws into question the model of mechanical shock acceleration of cosmic ray particles. Commonsense suggests that electrical particle acceleration in a double layer is far more effective. See Supernova 1987a Decoded to find that supernovae are not what astrophysicists think they are.

It is easy to see that we have within the solar plasma sheath a weak but constant electric field that accelerates solar protons away from the Sun in the form of the solar wind and causes electrons to drift toward the Sun (and causes negatively charged spacecraft, like Pioneer 10, to accelerate anomalously backwards toward the Sun). The overall result of the charge drifts in opposite directions is the current that lights the Sun. Throughout almost the entire volume of the heliosphere the solar plasma is quasi-neutral. That is, sampling will reveal equal numbers of positive ions and electrons in the solar “wind.” The solar plasma forms the conducting medium between the cathode region at the heliospheric boundary and the anode region near the Sun. When we get to the solar double layer, or plasma sheath, we see that the electric field reverses and solar wind protons are decelerated and bunch up. This will give the impression that we have reached the hypothetical termination shock. At the same time, ACR particles are accelerated from further out. This seems to fit with the Voyager 1 observations. It does not require a mechanical shock. The powerful electrical force dwarfs mechanical forces.

However, the most interesting effects may be found on the outer side of the solar plasma sheath where we should see a powerful electric field that has been estimated to accelerate solar wind protons away from the Sun at cosmic ray energies of the order of 10 billion electron volts. All stars generate cosmic rays in this way with energies that reflect the driving voltage of the star.

At the same time, electrons accelerated inward from interstellar space toward the solar sheath should provide the energy necessary to ionize neutral interstellar gas drifting through the solar plasma sheath. Depending upon the charge on the spacecraft, Voyager 1 itself should experience anomalous accelerations.

It would seem that even at this preliminary stage of the investigation of the edge of the solar system there should be room for more than one hypothesis. Maybe Voyager 1 will demonstrate what’s wrong with single hypotheses? Whatever, it’s high time to “eschew enthrallment in science!”