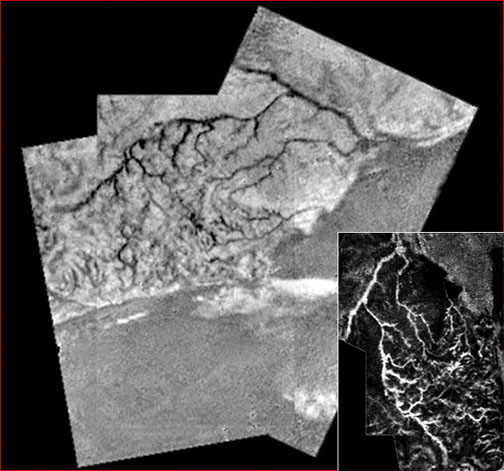 The original Rosetta Stone is a compact basalt slab (114x72x28 cm) that was found in July 1799 in the small Egyptian village of Rosette (Raschid), which is located in the western delta of the Nile. Today the stone is kept at the British Museum in London. It contains three inscriptions that represent a single text in three different variants of script. It enabled the French scholar Jean Francois Champollion (1790-1832) in 1822 to decipher the hieroglyphs, which gave a window into the world of the ancient Egyptians.

The same interest–and preconception–accompanies the Huygens probe’s arrival on the surface of Saturn’s major moon, Titan. We have been told that Titan should show us what the Earth looked like in its early youth. It seems that every comet, asteroid, moon and planet we visit is expected to tell us something about the Earth’s history. In this sense all missions are attempts to decipher Rosetta Stones. But translating the words or data without knowing the context only leads to contradictions and surprises when new information is uncovered. Titan sprang many surprises on researchers. It should warn us that our theories about the environment and circumstances of planetary birth/formation are far off the mark.

Of course, hearty congratulations are due to the engineers who built the Huygens probe and successfully guided it to the surface of Titan. And thanks to the scientists who designed and operated the many experiments aboard the probe. Unfortunately, those same scientists will employ the context of the 200-years-old solar nebula story of planetary formation to interpret the returned data. To paraphrase the astronomer Tom Van Flandern: The solar nebula theory;

“no longer makes testable predictions wherein proponents agree that a failure would falsify the hypothesis. Instead, the theory is continually amended to account for all new, unexpected discoveries. Indeed, many young scientists now think of this as a normal process in science! They forget, or were never taught, that a model has value only when it can predict new things that differentiate the model from chance and from other models before the new things are discovered. Explanations of new things are supposed to flow from the basic theory itself with, at most, an adjustable parameter or two, and not from add-on bits of new theory.”

The old solar nebula model has no successful predictions to its name.

By way of stark contrast, the ELECTRIC UNIVERSE® views Titan in a radically different context. Titan is not a body more than 4 billion years old. Titan is a young mini-planet born perhaps only tens of thousands of years ago. It was the baby of a planetary family that included the Earth. The ELECTRIC UNIVERSE® conceptual model can claim a number of successful predictions. Most importantly it was the only model to predict the surface features of smog-shrouded Titan before they were revealed in detail by Huygens.

How could this be? It was possible because the ELECTRIC UNIVERSE® concepts were based on a verifiable, instead of a theoretical, context for the recent history of the Earth and the solar system. The concepts were developed to explain prehistoric eyewitness representations of a sky that would be frighteningly unrecognisable to us. It is only in the last few decades that the most powerful electric discharge experiments on Earth have revealed an astonishing evolutionary pattern of plasma instabilities when a man-made thunderbolt is unleashed. The patterns are reproducible and have been named “Peratt instabilities” after the physicist who studied and classified them. The most amazing discovery of the 21st century is that millions of representations of those instabilities have been faithfully engraved on rocks around the world in the form of petroglyphs. Petroglyphs are the “Rosetta Stones” of the recent history of the solar system. The monumental effort involved in carving them and their common orientation to the sky show that what was happening in the celestial arena was of paramount concern to the prehistoric artists. It was a concern that still has echoes in our doomsday nightmares.

For the first time, a few scholars have combined this concrete evidence of intense electrical activity in the prehistoric sky with a forensic approach to the mytho-historical record of all ancient cultures. Immanuel Velikovsky pioneered and exemplified the latter technique in his controversial opus, Worlds in Collision. It received unscientific vilification because a recently chaotic solar system was believed to be impossible according to Newtonian mechanics. But in 1950 Velikovsky had thrown down a gauntlet that no scientist was willing to pick up. He wrote:

“The accepted [Newtonian] celestial mechanics, notwithstanding the many calculations that have been carried out to many decimal places, or verified by celestial motions, stands only if the sun … is as a whole an electrically neutral body, and also if the planets, in their usual orbits, are neutral bodies.”
(WinC, p. 387.)

“Newtonian physics is a guarantee against the occurrence of – just about anything disagreeable…. That this belief survived to some extent even up to the mid-20th century, is strongly suggested by the irrational hostility with which Immanuel Velikovsky’s theories were received in 1950.”

That belief and the irrational hostility to his theories still survive. Velikovsky was effectively ambushed at the 1974 AAAS conference in San Francisco where he again explained to those who weren’t paying attention the first time:

“I was greatly surprised to find that astronomy, the queen of sciences, lives still in the pre-Faraday age, not even in the time of kerosene lamps, but of candles and oil.”

Nothing has changed; so powerful is the Newtonian ideology.

David Stove was right. Astronomers have adopted a pseudo-religious role, calming our fears of cosmic annihilation with their model of a clockwork solar system that has been undisturbed for an age beyond human comprehension. But in another sense the astronomers and David Stove were wrong. A Newtonian planetary system is in fact not stable. Although rarely acknowledged, the many-body gravitational model is subject to “wild” motions, and it requires a force in addition to gravity to suppress them and to prevent chaos.

Velikovsky and his engineer colleague, Ralph Juergens, inspired the pursuit of an electrical cosmology that could explain how the solar system could look so peaceful today after a recent cosmic traffic accident. Juergens’ 1970’s electric corona discharge model of the Sun was a good one. It was quite specific, with few adjustable parameters, and it was easily falsifiable. Since then only minor corrections to Juergens’ model of the Sun have been required. The electrical model has been able to explain the anomalous accelerations of comets and of the Pioneer spacecraft. It is the only model to do that using standard physics. More importantly, it is an effect that could operate to damp radial movement of planets, or wild motions.

Mytho-historians have shown that it is possible to reconstruct the dramatic recent geological history of the Earth. It is fortunate that we have confirmation from an independent source in the study of high-energy electric discharges because the reconstructed history bears no resemblance to astronomers’ bland computer retro-calculations. We now know that the powerful electric force operated between certain close-moving planets in the past. The true history of the Earth is more astounding than any science-fiction writer could have dreamed. The story is outlined in Cassini’s Homecoming where I wrote:

“a scenario follows that is so alien to any conventional theory of Saturn’s history that it should be easily tested against information gained from the Cassini mission. It shows striking connections between many seemingly unrelated facts about certain planets. That is something that conventional cosmogony has not been able to do.”

The planets were identified as Saturn, Venus, Mars and the Earth.

The context in which we should view Titan as a Rosetta Stone for an earlier Earth had been firmly established before Cassini arrived at Saturn. Venus, Earth and Mars were close planetary partners in a former stellar system that was recently captured by the Sun. They were originally satellites of the independent brown dwarf star, proto-Saturn. Titan, in that context, was simply another small planet orbiting proto-Saturn. All stars electrically eject matter in defiance of gravity. Ejection of charged matter is required to maintain electrical balance with their environment. The Sun has its “solar wind” and coronal mass ejections. In extremis, a star may eject a fragment of its interior in a stellar megalightning flash, or nova outburst, to form a close orbiting companion. The mytho-historical record identifies the planet Venus as such a new-born fragment of proto-Saturn. It was born when proto-Saturn flared up in the alien electrical domain of our present Sun.

Being highly charged and of much smaller surface area than proto-Saturn, Venus discharged brilliantly in the prehistoric sky. The Sumerians revered Venus as the goddess Inanna, whose “tempestuous radiance” caused fear and trembling in mankind. In their hymns they depicted the goddess “raining the fanned fire down upon the nation.” The Babylonians knew the same planet as Ishtar, “who is clothed with fire and bears aloft a crown of awful splendor.” She was the “blazing fire which rains upon the hostile land.” Inanna’s Egyptian counterpart Sekhmet was a star “scattering its flame in fire … a flame of fire in her tempest.” “The fear of me is in their hearts, and the awe of me is in their hearts,” the goddess proclaims. In more than one land Venus was said to rival the Sun in brightness. The most prominent feature discovered on Venus is a planet-girdling pattern of blisters and spidery channels that resulted from this prolonged cosmic discharge into its thick atmosphere. Venus’ extreme heat and heavy atmosphere is due in large part to that electrical discharge and recent birth.

Huygens’ descent to Titan’s surface was an acid test of this reconstruction of events. In particular, the expectation of channels carved by cosmic lightning, similar to Venus, was confirmed. The channels on Titan bear the hallmarks of cosmic lightning imprinted on the surface. Also, the lack of a methane ocean was predicted because Titan’s atmosphere is very young and a vast reservoir of the gas is not needed to make good the losses expected over the 4.7 billion years required by the solar nebula model. Titan is a Rosetta Stone for planetary history ‘once the context is understood. The hieroglyphs on the original could be deciphered when it was realized they repeated what was said in Greek. Titan’s surface – and the other bodies in the solar system – can be deciphered when it’s realized they repeat what is “said” in plasma discharges. Titan is not a document scribed by gravity attesting to an ancient nebula but a document etched by electricity proclaiming a recent birth.