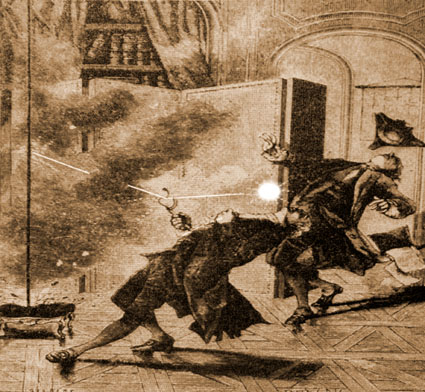 This is a report on a few aspects of the Institute of Electrical and Electronics Engineers (IEEE) International Conference on Plasma Science (ICOPS 2006), held in Michigan earlier this month. The IEEE is the world’s leading professional association for the advancement of technology, with more than 365,000 members. The labours of these large numbers of professionals have driven technological progress in the twentieth century. Their success has often been equated with scientific progress, which has allowed the stagnation in the hard sciences to be overlooked. It is engineers who have made space exploration possible, and their precision probes and navigation skills have returned data that routinely surprises space scientists. After each surprise the scientists scuttle back to their drawing boards but they only touch-up the old picture. Perhaps it is time for engineers to bring new concepts to the drawing board.

Members of the IEEE Nuclear and Plasma Sciences Society began to show the way to a new understanding of the universe several decades ago. Their practical experience with plasma, the stuff from which almost the entire visible universe is composed, contrasts strongly with the purely theoretical approach of astrophysicists. Astrophysicists need to invent black holes, dark matter, strange matter and dark energy simply to salvage their theoretical models based on big bang assumptions and the puny force of gravity. Their language has lost touch with the newly perceived reality. 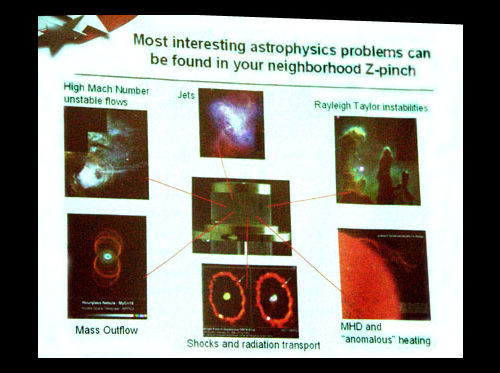 This slide, shown at the IEEE ICOPS 2006 conference, refers to a “Z-pinch,” which is the compression of an electric discharge in plasma by its own induced magnetic field. The canister in the center of the slide has a number of fine tungsten wires stretched between the top metal cap and the lower cap. An intense current pulse is sent through the wires causing them to vaporize and form plasma. The current generates a powerful cylindrical magnetic field that squeezes the plasma inwards toward the vertical axis of the canister. The fact that the plasma is “pinched” along the z-axis gives rise to the term “Z-pinch.”

The slide is important because it reveals the peculiar fact that although plasma physicists can see the obvious application of their high-energy laboratory Z-pinches to cosmic phenomena, most seem to assume the electrical Z-pinch is transitory, like their experiments. So they go on to apply incorrect magnetohydrodynamic (MHD) concepts – such as “flows,” “jets” and “shocks” to the cosmic phenomena. Magnetohydrodynamics ignores electricity and relies on magnetic fields being “trapped” in plasma. The “father” of plasma physics, the late Hannes Alfvén, showed decades ago that the concept of “frozen in” magnetic fields in space plasma is an invalid concept. He called for primary consideration of the electric circuits, which must be present to sustain the magnetic fields.

It is the contention of the ELECTRIC UNIVERSE® model that all stars are the focus of a continuous Z-pinch effect. Where the discharge becomes sufficiently violent, the familiar Z-pinch morphology becomes apparent in glowing bipolar planetary nebulae (such as the one in the lower left image). And, for example, at bottom center the beaded rings of supernova 1987a are a manifestation of an ongoing Z-pinch and have nothing to do with shocks.

A few IEEE plasma cosmologists do get the picture. With a continuous source of current into a Z-pinch it is possible to mimic the formation and movement of spiral galaxies and the unexpected bipolar shapes of planetary nebulae. No weird science is called for. The crucial requirement is that an uninterrupted cosmic source of electrical power be available. Yet no textbook on astronomy or astrophysics dares to mention electricity. Magnetic fields are mysteriously conjured up without electricity.

The most disturbing thing is that science has become so specialized and insular that astrophysicists do not attend meetings of the IEEE Nuclear and Plasma Sciences Society. They would be shocked if they did. The freewheeling exchange of ideas at ICOPS was quite an eye opener for someone who also attends the monoculture of “big bang” astrophysics/astronomy meetings.

A notable presentation at the conference was by a well-known radio astronomer who gave an invited paper to the Space Plasmas audience. He was moved to depart from his prepared talk by an exciting discovery he had made in consultation with others at the conference. Radio astronomy enables plasma scientists to map the “cosmic power lines” that thread the universe. The difference between the ELECTRIC UNIVERSE® and the “shorted out” universe of astrophysics could not be starker. The discovery, which I hope to report on soon, puts the lid firmly on unscientific big bang cosmology.

For me, one of the highlights of the IEEE Plasma Sciences meeting was a Plenary Talk by J. Pace VanDevender, Vice President Emeritus of Sandia National Labs, titled “Ball Lightning: New Physics, New Energy Source, or Just Entertainment.”

Dr. VanDevender is a Senior Member of the IEEE and a Fellow of the American Physical Society and the American Association for the Advancement of Science.

VanDevender does not consider ball lightning as “just entertainment.” He has launched into what he calls “High Risk Research at the Boundary of Denial and Superstition.” His interest focuses on “Extreme Ball Lightning.” The term “extreme” distinguishes it from ordinary ball lightning, which lasts less than 10 seconds and is benign. Ordinary ball lightning is probably “normal plasma.” It is the kind of ball lightning produced in the laboratory. It spontaneously appears in the open-air, closed rooms, aircraft at altitude, and was seen in at least one submarine. It appears before, during or after lightning. About 5% are seen in clear weather.

• it glows in air;
• it originates from nothing visible;
• it lasts between 10 and 1200 seconds;
• it floats at about 1 meter/second;
• it is lethal or potentially lethal;
• it causes significant damage;
• it contains energy estimated at 100,000 to 1 billion Joules, far in excess of the energy density attributable to chemicals or electrostatics;
• it penetrates walls, glass and metal, generally without leaving a hole;
• it induces large currents but is in radial force equilibrium;
• it leaves black streaks on corpses without the spasm of electrocution;
• it can excavate tons of earth.

An EBL in County Donegal, Ireland, on August 6, 1868 travelled about 1.6 km and excavated ~200 cubic meters of water saturated peat in ~ 1200 second. VanDevender followed up a reputable report by Michael Fitzgerald to the Royal Society with a visit to the site. He confirmed the essentials, insofar as it was possible so long after the event. It was evident that the conductive peat would immediately neutralize any charge, so EBL cannot be electrostatic.

Many ideas have been suggested. Radio frequency excitation by a thunderstorm; polymer threads carrying large electric charges; tiny black holes; and antigravity (offered by Carl Sagan from unspecified physics). But to date, no theory addresses the characteristics of EBL. It is an intriguing problem. VanDevender said, “It seems to require new physics.”

My view is that explaining EBL doesn’t require new physics. The answer may be obscured by mistaken concepts in particle physics. The clue comes from the observed ability of EBL to penetrate solid material. VanDevender noted that EBL “may be subatomic and electrically neutral to not violate impenetrability of matter.” There is one stable subatomic particle that has the ability to pass through solids without any appreciable effect – the neutrino. But how can energy be stored in neutrinos?

A neutrino has a vanishingly small mass which allows it to change “flavours.” If we do away with the misleading and inappropriate language of particle physics, we may view the neutrino “flavours” as different resonant states of an orbiting system of near-massless charges within the neutrino. This simple concept that all subatomic particles, including the electron and neutrino, are composed of various resonant configurations of smaller units of charge was discussed in “Toward a Real Theory of Everything.” There I wrote:

The most collapsed form of matter is the neutrino, which has a vanishingly small mass. However, the neutrino must contain all of the charges required to form two particles – a particle and its antiparticle – in a process known as “pair production.” This symmetry explains why a neutrino is considered to be its own anti-particle. A neutrino, in the presence of an atomic nucleus, may accept energy from a gamma ray to reconstitute a particle and its anti-particle. “Empty space” is full of neutrinos. They are the repositories of matter in the universe, awaiting the burst of gamma-radiation to expand them to form the stuff of atoms.

In this model of neutrino structure, neutrinos may have intermediate, unstable resonant states between their ground state and the state at which they split to form a particle and anti-particle (pair production). Therefore, EBL may be a rare phenomenon because it would require an exquisitely tuned resonant environment to “pump up” the internal energy of a population of neutrinos that happen to be “passing through.”

I envisage, for example, a lightning bolt striking a mineral that contains a concentration of some heavy element, which acts as a nuclear catalyst. In other words, the heavy element has a resonance within its nucleus that matches a high-energy one in adjacent neutrinos. There may be other ways to excite this resonance.

The model I envisage for EBL goes like this:

1. A heavy element within the environment has a resonance within the nucleus excited by lightning, cosmic-rays or some other means.

2. Ubiquitous neutrinos drifting through the excited atoms accept energy resonantly from a number of such excited nuclei.

3. Following the usual relationship between mass and stored electrical energy,
E = mc2, the mass of the neutrino increases.

4. Such “heavy” or excited neutrinos are distorted to form tiny electric dipoles, which will tend to clump together since they have zero net repulsive charge.

5. The energy required to split a neutrino into a positron-electron pair is considerable – about a million electron volts. That provides us with an upper limit of the energy that may be stored within a single neutrino without splitting it in two. It satisfies the requirement that the stored energy in EBL exceeds that available by chemical or electrostatic means.

6. The heavy neutrinos in the EBL would need to have a total mass of a mere hundredth of a milligram to provide a gigajoule of energy.

7. The radial electric field within the tiny sphere of heavy neutrinos may be sufficiently intense to disrupt (ionize) atoms they encounter. This may explain the glow and movement of EBL.

8. Heavy neutrinos respond only weakly to gravity and have no buoyancy since they do not displace matter but pass right through it. This explains how EBL may pass through “walls, glass and metal, generally without leaving a hole.”

9. The heavy neutrinos will tend to release their stored energy upon encounters with any atomic nuclei capable of resonant interactions with them.

10. Considerable energy is available from transitions of the heavy neutrinos back to the ground state. Low-energy intermediate transitions may power the glow and movement of the EBL. A sudden, explosive release of energy may be triggered by chemical elements in the environment that can accept energy resonantly from the EBL. High-energy transitions leading to sudden heating and explosion are observed.

11. This model explains why electrostatic effects are not found. Victims are burnt or blackened and not electrocuted.

There are electromagnetic phenomena associated with EBL that need to be investigated and the mode of energy transfer to the environment needs more study. The question also arises whether it is likely that heavy neutrinos might have been observed in the laboratory. Neutrinos are the most common and the most elusive particles in the universe – even more elusive than extreme ball lightning.