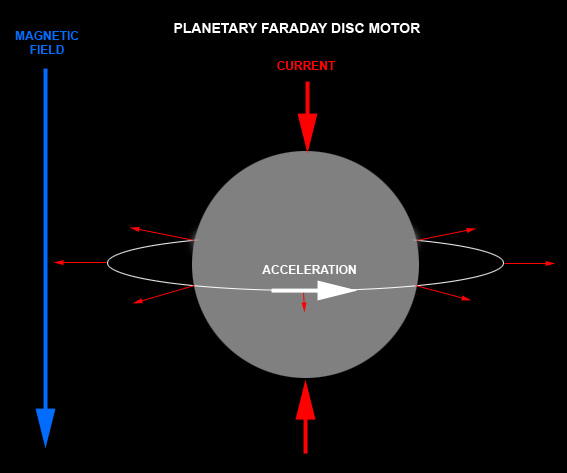 The following excerpt is from the Keck Observatory News:

MAUNA KEA (February 4, 2005) Astronomers using the Keck I telescope in Hawaii are learning much more about a strange, thermal “hot spot” on Saturn that is located at the tip of the planet’s south pole. In what the team is calling the sharpest thermal views of Saturn ever taken from the ground, the new set of infrared images suggest a warm polar vortex at Saturn’s south pole — the first to ever be discovered in the solar system. This warm polar cap is home to a distinct compact hot spot, believed to contain the highest measured temperatures on Saturn. A paper announcing the results appears in the Feb. 4th issue of “Science.”

A “polar vortex” is a persistent, large-scale weather pattern, likened to a jet stream on Earth that occurs in the upper atmosphere. On Earth, the Arctic Polar Vortex is typically located over eastern North America in Canada and plunges cold artic air to the Northern Plains in the United States. Earth’s Antarctic Polar Vortex, centered over Antarctica, is responsible for trapping air and creating unusual chemistry, such as the effects that create the “ozone hole.” Polar vortices are found on Earth, Jupiter, Mars and Venus, and are colder than their surroundings. But new images from the W. M. Keck Observatory show the first evidence of a polar vortex at much warmer temperatures. And the warmer, compact region at the pole itself is quite unusual.

“There is nothing like this compact warm cap in the Earth’s atmosphere,” said Dr. Glenn S. Orton, of the Jet Propulsion Laboratory in Pasadena and lead author of the paper describing the results. “Meteorologists have detected sudden warming of the pole, but on Earth this effect is very short-term. This phenomenon on Saturn is longer-lived because we’ve been seeing hints of it in our data for at least two years.”

The puzzle isn’t that Saturn’s south pole is warm; after all, it has been exposed to 15 years of continuous sunlight, having just reached its summer Solstice in late 2002. But both the distinct boundary of a warm polar vortex some 30 degrees latitude from the southern pole and a very hot “tip” right at the pole were completely unexpected.

The abrupt temperature changes may be caused by a concentration of sunlight-absorbing particulates in the upper atmosphere which trap in heat at the stratosphere. This theory explains why the hot spot appears dark in visible light and contains the highest measured temperatures on the planet. However, this alone does not explain why the particles themselves are constrained to the general southern part of Saturn and particularly to a compact area near the tip of Saturn’s south pole. Forced downwelling of relatively dry air would explain this effect, which is consistent with other observations taken of the tropospheric clouds, but more observations are needed.

More details may be forthcoming from an infrared spectrometer on the joint NASA/ESA Cassini mission which is currently orbiting Saturn. The Composite Infrared Spectrometer (CIRS) measures continuous spectral information spanning the same wavelengths as the Keck observations, but the two experiments are expected to complement each other. Between March and May in 2005, the CIRS instrument on Cassini will be able to look at the south polar region in detail for the first time. The discovery of the hot spot at Saturn’s south pole has prompted the CIRS science team, one of whom is Dr. Orton, to spend more time looking at this area.

“One of the obvious questions is whether Saturn’s north pole is anomalously cold and whether a cold polar vortex has been established there,” added Dr. Orton. “This is a question that can only be answered by the Cassini’s CIRS experiment in the near term, as this region can not be seen from Earth using ground-based instruments.”

Comment: The report states the “warm polar vortex at Saturn’s south pole is the first to ever be discovered in the solar system.” Keck researchers don’t seem to have done their homework. Or maybe things that can’t be explained get forgotten! Saturn’s “warm polar vortex” is NOT “the first to ever be discovered.” The Pioneer Venus Orbiter (PVO) discovered a warm “giant vortex of surprisingly complex structure and behaviour located in the middle atmosphere at the north pole of the planet, with a similar feature presumed to exist at the south pole also.”*

Just as was found in the very hot “tip” at the pole on Saturn, the polar vortex on Venus is the hottest spot in the planet’s upper atmosphere!

Professor Fred Taylor of the of the University of Oxford Atmospheric, Oceanic and Planetary Physics Department wrote about the Venusian polar vortex:

“the absence of viable theories which can be tested, or in this case any theory at all, leaves us uncomfortably in doubt as to our basic ability to understand even gross features of planetary atmospheric circulations.”*

This situation will not be changed until the electrical nature of the universe is acknowledged and scientists studying the solar system and deep space are appropriately trained. The Venusian polar dipole is immediately recognizable to a plasma cosmologist. But plasma cosmology is a paradigm only recently recognized by the electrical engineering fraternity of the IEEE. No university on Earth presents a course in the subject. Metaphysics is preferred in cosmology over sound engineering principles.

The ELECTRIC UNIVERSE® takes plasma cosmology a step further in proposing that a star is primarily an electrical phenomenon, forming a focus within a galactic “glow discharge.” Planets are minor “electrodes” within a stellar discharge envelope. The electrical energy is delivered to stars and planets in the manner of a simple Faraday motor.

The electromotive power is deposited mostly in the upper atmosphere at mid to low latitudes and gives rise to its “super rotation.” That is, the atmosphere races around the planet faster than the planet turns. It is a phenomenon observed on Venus and Titan and remains unexplained by the usual atmospheric physics, which relies mainly on solar heating. It is the cause of the phenomenal winds on the gas giant planets in the outer solar system, where solar heating is minimal. It has implications for the jet streams and weather patterns on Earth as well.

It is obvious, looking at the diagram, that there is a concentrated current flow at the planet’s poles. Plasma cosmologists explain that electric current is transferred over vast distances in space by cosmic current filaments. And the filaments tend to organize into “twisted pairs” according to the Biot-Savart force law. It is known as the principle of “doubleness” in current-conducting plasmas. It is intuitively pleasing to see that Nature uses this (well-known to electrical engineers) twisted pair arrangement of conductors to minimize losses. Such filament pairs are called “Birkeland currents.”

So we should expect to see evidence of the twisted pair configuration at the poles of Venus, if the input current is sufficiently strong and this model is correct. And that is precisely what was discovered. The two hot spots are the footprints of cosmic Birkeland currents. The Venusian polar dipole shows the precise configuration and motion of Birkeland current pairs in plasma discharge experiments. That includes a surrounding spiral vortex.

The enhanced infrared emission from the polar dipole is due to the dissipation of electrical energy in the upper atmosphere of Venus. The polar dipole has a variable rotation rate and it varies the position of its axis of rotation with respect to that of the planet. It was observed to move 500 km from the Venusian pole in less than a day and return just as quickly. The variable nature of the electrical input to Venus via the Sun and the snaking about of the Birkeland currents explain both these characteristics.

Of particular interest are the linear filaments sometimes seen connecting the opposite sides of the hot spots. Taylor writes:

“It is virtually impossible, even with complete license, to begin to speculate in any detail as to what mechanism could give rise to such a curious effect.”

The answer, in the ELECTRIC UNIVERSE® model is simple. They are a feature seen in simulations of the behavior between two interacting Birkeland current filaments where plasma becomes trapped in the elliptical core between them.**

Spiral galaxies are the grandest cosmic plasma discharge phenomena in the universe. The Venusian polar dipole exhibits the morphology of the early stages of development of a spiral galaxy from the interaction of two intergalactic Birkeland current streams. And that includes a filamentary connection between the two current “hot spots” in the manner observed on Venus. The enormous scalability of plasma phenomena allow for such a comparison.

Returning to Saturn’s polar very hot “tip”, it should be found on closer inspection to exhibit a similar structure to the Venusian polar dipole. Its compactness is due to the electromagnetic pinch effect where it enters Saturn’s atmosphere. The hot spot’s behavior should be variable like that on Venus and correlated with the appearance of Saturn’s ring spokes, which are a visible manifestation of a heightened equatorial discharge in that part of Saturn’s Faraday motor circuit. The ELECTRIC UNIVERSE® also predicts, experimentum crucis, that BOTH poles should be hot, not one hot and the other cold.

Similarly, I expect Titan to exhibit polar hot spots because its electrical response to its environment is very active and similar to that of Venus – as mentioned earlier, Titan’s atmosphere super rotates. Electrically hyperactive Venus and Titan are both recent children of Saturn, carrying some of their parents’ excess charge.

Verification of any of these predictions should serve notice that plasma cosmology and the electric model of stars is the cosmology of the future.