My earlier prediction that the so-called volcanos would be much hotter than the estimates made at lower resolution has been hinted at by NASA. It is reported that the “lava” might be hotter than 1600K. This scenario sounds like a replay of the surface temperature of Venus!

“The active lava was hot enough to cause what the camera team describes as “bleeding” in Galileo’s camera, caused when the camera’s detector is so overloaded by the brightness of the target that electrons spill down across the detector. This shows up as a white blur in the image.”

But 1600K is only red-hot. What lava on Earth, even when photographed at night, would cause bleeding of a solid-state camera image? It usually occurs only if such a camera is pointed at a very bright light. I think that is precisely what occurred at Io. The Galileo camera was looking at a number of arc-lights in the form of cathode spots. Their temperature could range as high as 6000K over very small areas – approaching that of the surface of the Sun. That would certainly overload Galileo’s pixels! The smearing seems to have occurred vertically downwards in the image so the cathode spots would form a line along the top of the white areas. That conforms to lower resolution images taken earlier from above another “volcano”. It is important to note that cathode spots usually arrange themselves in a line along a segment of a circle. That fits the evidence of circular scalloping of the landforms in the rest of the image. And it is the remainder of the image that confirms the electric arc model.

The descriptions of the burnt-out white smears in the picture as lava fountains are a classic example of “seeing” only what you believe. To register detail in the bright light would probably have required a neutral density filter that would have darkened the rest of the picture to obscurity. But NASA knows that it is a volcano (just as they knew Venus wasn’t all that hot) so that didn’t enter into their plans. Instead they have had to resort to coloring-in the picture. But where are the huge lava flows that are supposed to extend for more than 100 kilometers (60 miles) in some instances? The surface has an etched appearance rather than showing a build-up of volcanic outpourings.

“Also of great interest is the flat-topped mesa on the right. The scalloped margins are typical of a process geologists call “sapping,” that occurs when erosion is caused by a fluid escaping from the base of a cliff. On Earth, such sapping features are caused by springs of groundwater. Similar features on Mars are one of the key pieces of evidence for past water on the Martian surface. However, on Io, the liquid is presumed to be pressurized sulfur dioxide. The liquid sulfur dioxide should change to a gas almost instantaneously upon reaching the near-vacuum of Io’s surface, blasting away material at the base of the cliff. The sulfur dioxide gas eventually freezes out on the surface of Io in the form of a frost. As the frost is buried by later deposits, it can be heated and pressurized until it becomes a liquid. This liquid then flows out of the ground, completing Io’s version of the ‘water cycle.'” 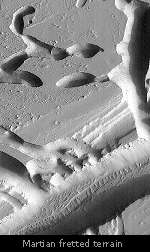 NASA scientists have had to introduce the ad hoc requirement of different liquids flowing beneath the surfaces of Mars and Io to drive surface sapping. The process of sapping has not been well studied and the photographs on Earth given as examples in Prof. Baker’s book, The Channels of Mars, do not look much like that seen on Mars or Io.

The cross-cutting channels on Mars are inexplicable by any flowing liquid. Sapping requires a replenishable source of liquid. It needs the surface layer to be harder than the material beneath. The eroded material slumps into the channel. On both Mars and Io the eroded material has not flowed anywhere, it has disappeared! Neither shows any sign of erosive liquids on the surface. So the ‘water cycle’ on Io is a desperate analogue considering that the erosion on Io is an order of magnitude or more greater than any examples of sapping seen here on Earth – where we have an abundance of liquid water.

The Io close-up shows a surface that bears all of the classic features of a spark-machined surface – the flat clean crater floors and steep circular scalloped walls with sharp edges. It is ironic that in comparing it to the Martian “fretted” terrain, NASA has chosen another superb example of cathodic erosion. The eroded material is jetted into space leaving a surgically clean wound. This is a hallmark of spark-machined surfaces. The cathode jets are seen today on Io and misinterpreted as volcanic plumes. Blast effects at the surface of Io caused by the hypothetical conversion of sulfur dioxide from the liquid to the gaseous state will not give rise to the vertical supersonic plumes observed. Nor will it sort the material that falls back to the surface into perfect rings in the manner of a giant natural mass spectrometer.