“Is it likely that any astonishing new developments are lying in wait for us? Is it possible that the cosmology of 500 years hence will extend as far beyond our present beliefs as our cosmology goes beyond that of Newton?”
—Fred Hoyle, The Nature of the Universe

NASA’s IBEX (Interstellar Boundary Explorer) spacecraft has made the first all-sky maps of the boundary between the Sun’s environment (the heliosphere), and interstellar space. The results, reported as a bright, winding ribbon of unknown origin which bisects the maps, have taken researchers by surprise. However, the discovery fits the electric model of stars perfectly.

The meter-wide, hexagonal IBEX monitors the edge of the solar system from Earth orbit by “seeing” the heliosphere’s outer boundary in the “light” of energetic neutral hydrogen atoms (ENA’s). The news releases of October 15 highlighted the difficulties this discovery causes. “The thing that’s really shocking is this ribbon,” says IBEX principal investigator David McComas of Southwest Research Institute in San Antonio, Texas. Researchers had expected gusts in the solar wind blowing against the boundary to create 20% or 30% variations in ENA emissions, but the ribbon is 10 times that intense—a narrow band blazing across the sky like some Milky Way on fire. Charged particles have apparently become bunched along the ribbon near the boundary, says McComas, but how they got there “is still a big mystery. Our previous ideas about the outer heliosphere are going to have to be revised.” “I’m blown away completely,” says space physicist Neil Murphy of NASA’s Jet Propulsion Laboratory in Pasadena, California. “It’s amazing, it’s opened up a new kind of astronomy.”

“The expectations of NASA scientists are not being met because their shock front model is incorrect. The boundary that Voyager has reached is more complex and structured than a mechanical impact.”
—Wal Thornhill, September 2006.

IBEX has discovered that the heliosheath is dominated not by the Sun but by the Galaxy’s magnetic field. Since the galaxy’s magnetic field traces the direction of interstellar electric current flow in space near the Sun, it is a result that conforms to the EU model of galaxies and stars.

It is necessary to acknowledge that the cometary heliosphere model seems reasonable when some images of stars do have a cometary appearance. Examples of cometary stars are provided in the NASA news report:

Cometary phenomena are not a simple mechanical effect of an object plowing through a thin gas. Comets are an electrical phenomenon where the comet nucleus is a negative cathode in the Sun’s plasma discharge. Examples of cometary stars are uncommon because stars are normally a positive anode in the galactic discharge. Characteristically, cathodes tend to jet matter into the plasma to form spectacular comas and tails, as seen above. Stars may become comets in the process of electrical capture by a more highly charged star. It is a mistake to assume a cometary astrosphere model for all stars.

However, a more fundamental conceptual error is to invoke stellar and galactic “winds” and the notion of tails being “swept downstream.” Astrospheres and comets are plasma discharge phenomena! Electrodynamic forces govern them. Discussions about the “external magnetic forces of the galactic wind” dominating the shape of the heliosphere highlights a curious blindspot in astrophysics. In 1970 the late Hannes Alfvén counseled against the notion that magnetic fields can exist in space while ignoring their origin in cosmic electric currents and their circuits. Alfvén predicted an imminent “crisis in cosmology.” I’m sure he never imagined that scientific revolutions could take a century or more in this era of global communication. But specialism and specialist jargon is the enemy of communication and the wide-ranging investigation needed to compose the “big picture” we call cosmology. And no scientist likes to admit their specialty is in crisis.

For a more detailed perspective on the astrophysical crisis, I recommend my earlier article of April 2007, “The Astrophysical Crisis at Red Square.” There I wrote:

“Alfvén pioneered the stellar circuit concept and it seems his ‘wiring diagram’ is essentially correct but incomplete because it does not show the star’s connection to the larger galactic circuit. Alfvén remarked, “The [stellar] current closes at large distances, but we do not know where.” Plasma cosmologists have supplied the answer by mapping the currents flowing along the arms of spiral galaxies. It is but a small step from there to see that all stars are the focus of Z-pinches within a galactic discharge. Normally the current flows in ‘dark mode’ so we don’t usually see the spectacular bipolar ‘wiring harnesses’ of hyperactive stars.”

The diagram appearing in that article is shown below, re-annotated.

has so far not found a satisfactory explanation.””] 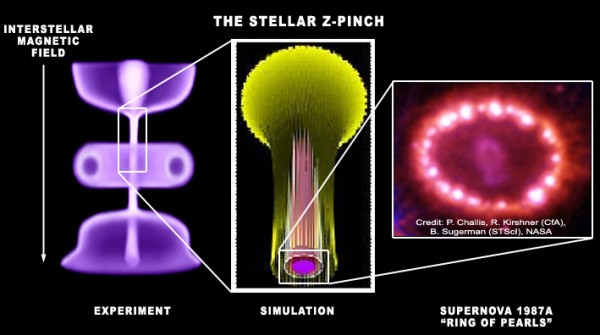 Meanwhile, in 2005 I explained all three rings of supernova 1987Ain terms of a stellar plasma Z-pinch. Above we see the essential features of a plasma Z-pinch experiment (left); the details of the concentric Birkeland current filament cylinders (center); and the ‘witness plate’ resulting from the galactic Birkeland current filaments in that cylinder striking the matter in the disk expelled from the star at the focus of supernova 1987A. The bright beads are like the effect of a ring of searchlights punching through a thin cloud. The tendency for pairing of the bright circular spots and the extremely slow expansion rate of the equatorial ring suggest the Z-pinch model is correct.

A normal star will have the same Z-pinch environment as a supernova but at a much lower energy. So instead of a brilliant ring of lights in the sky, astronomers detect a ‘bright ribbon’ of ENA’s, caused by modest excitation of matter from the Sun’s stellar “wind” by the local galactic Z-pinch.

The Sun’s heliospheric circuit is connected to the galaxy via the central column and the disk of charged particles. The current path is traced by magnetic fields. The “open” helical magnetic fields discovered high above the Sun’s poles by the Ulysses spacecraft are supportive of Alfvén’s stellar circuit model. And the solar “wind” would seem to connect to the broader disk of charged particles about the heliosphere.

Given the detail in this model we should expect, as more data comes in, that researchers may find in the ENA “ribbon,” bright spots, filamentary structures, and movement of the bright spots consistent with rotation of Birkeland current filament pairs and their possible coalescence.

The Science journal reports the opinion of one of the researchers that:

That is true, but scientists will continue to suffer surprises while they have “no doubt” that the galactic wind and the interstellar magnetic field are the dominant forces that shape the heliosphere.

Researchers are keen to see how changes in the solar wind affect the ENA observations as the sun moves toward the maximum of its 11-year cycle. Such observations are very important. The solar cycle is controlled by its local galactic Z-pinch, so any variation in ENA’s may provide some clues about the origin of the quasi-cyclic variability in the circuit supplying DC electrical power to the Sun or “solar cycle.” The “brightness” of the ENA’s should vary, probably out of phase with the solar cycle.

In 1984 Alfvén predicted from his circuit model of the Sun there are two double layers, one connected to each pole at some unknown distance from the Sun or heliosphere. He wrote:

“As neither double layer nor circuit can be derived from magnetofluid models of a plasma, such models are useless for treating energy transfer by means of double layers. They must be replaced by particle models and circuit theory… Application to the heliospheric current systems leads to the prediction of two double layers on the sun’s axis which may give radiations detectable from Earth. Double layers in space should be classified as a new type of celestial object.”
— H. Alfvén, Double Layers and Circuits in Astrophysics, IEEE Transactions On Plasma Science, Vol. PS-14, No. 6, December 1986.

There is some other research to be encouraged by this ENAs discovery, which should throw further light on the Sun’s electrical environment. The axial double layers should be detectable as nearby, fluctuating radio and cosmic ray sources. In fact their oscillation may modulate the current flow and be a source of the solar cycle. Already there has been a report of an unexplained high-energy cosmic ray “hot spot” roughly in the direction of the inferred “heliotail.” The energies of the cosmic rays are in the range possible by acceleration in a galactic double layer (Carlqvist). Confirmation may soon come from observations of high-energy cosmic-ray electrons. The electrons undergo synchrotron and inverse Compton scattering losses and thus cannot travel very far from their sources, which makes them sensitive probes of nearby galactic sources and propagation. If the diagram above is close to the real situation then we might expect cosmic-ray electrons to arrive from the double layer in the opposite direction in the sky to the nuclear cosmic rays. 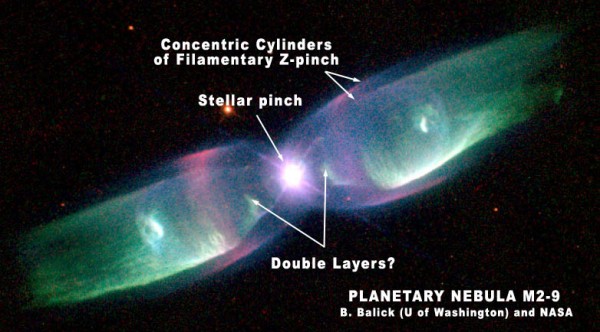 The EU model is based on a hierarchy of repeated patterns of plasma behavior, from the size of a galaxy down to a few centimeters in the laboratory. Therefore it is subject to experimental confirmation, unlike most astrophysical theory today. So discoveries from space like this one should trigger experiments in plasma laboratories around the world instead of theorists wasting resources by conjuring up ever more complex and unlikely models based on invalid concepts of space plasma. IBEX’s recent results that have taken researchers by surprise have given yet more strength to the EU model, a model that confidently predicts that the shape of the Sun’s galactic plasma environment is the hourglass, Z-pinch shape of planetary nebulae and supernovae, aligned with the local interstellar magnetic field. The beautiful symmetrical patterns that arise in plasma discharges from very simple principles renders all modeling that ignores the electrical nature of matter and the universe worthless.