The second anniversary of the Columbia disaster passed almost unnoticed on February 1. Recent news reports said that the astronauts assigned to the first space shuttle mission since then were confident the mistakes and technical problems that led to that accident were in the past.

Disturbingly, the astronauts’ confidence in the revamped Shuttle is misplaced. Shuttle engineers caught the blame for a scientific failure. NASA scientists seem unwilling to admit they do NOT understand the cause of lightning and so were unfit to judge whether Columbia was struck a fatal blow by a super-bolt of lightning from space, now referred to as MEGALIGHTNING. Instead they have managed to convince themselves and the public that Columbia was mechanically damaged on takeoff. By doing so they risk the lives of astronauts in future. It is a high price to pay. 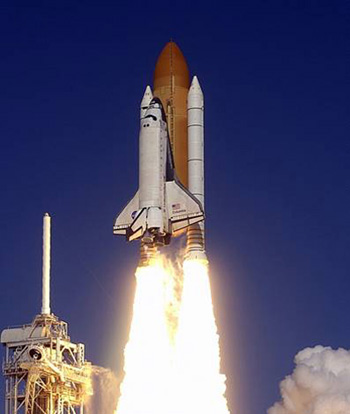 A week after Columbia’s demise I wrote the news article Columbia: Questions of Some Gravity[1]. I stand by the conclusion I reached in that article. Columbia was mortally damaged during re-entry by a bolt of megalightning. I have now seen the image[2] [link updated 2012] referred to in the San Francisco Chronicle.* A characteristic corkscrew trail of lightning appears at very high altitude “out of a clear blue sky.” It is seen to brighten as it joins the ionized reentry trail of Columbia. Experts who checked the San Francisco photo concluded the time-lapse image of lightning was caused by a camera wobble! But there is no sign of wobble in the Columbia trail or in other similar photographs taken on the same camera at the time. I estimate the elevation above the northern horizon to have been a little less than 40 degrees.

The possibility of destruction by megalightning became front page news in the San Francisco Chronicle. The camera and the photographic evidence was examined by NASA. Professor Umran Inan of Stanford University said: “our conclusion was that there was no evidence for any electrical activity at the altitudes that the shuttle went through …there was a camera shot. It turned out to most likely be an artefact of the particular camera.”

NASA’s probe into the shuttle lightning strike was never made public. Unfortunately it is an area where there is considerable ignorance, which would be embarrassing to expose to the media spotlight. Walt Lyons, a meteorologist with FMA Research of Colorado, in 1996 reported to NASA on the dangers of sprites. He concluded that their vast size spread out their energy, making them unlikely killers – but cautioned not enough was known to be certain they were harmless.

America’s expert in the detection of distant atom bomb tests, Dr Alfred Beddard confirmed an unusual earthquake-like sound using his infra-sonic array, which was listening when the Columbia went down. The sound came from the area of its re-entry path. 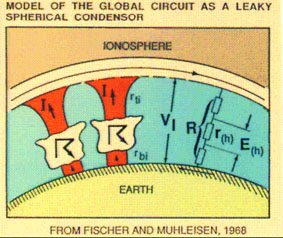 The photographic evidence presented to experts was dismissed primarily because there were no thunderstorms in the area and scientists DO NOT BELIEVE that lightning can occur in a clear blue sky or at that altitude. The irony is that Israeli astronaut Ilan Ramon, who had been tasked with studying the strange transient luminous events above thunderstorms, found an unprecedented red flash in the ionosphere 1000 kilometers from the nearest lightning. Yoav Yair of the Open University of Israel and his colleagues reported it several months later.
Meteorologists have a major problem. They acknowledge that the Earth’s atmosphere acts like a leaky, self-repairing capacitor (condensor). However, they assume that this spherical capacitor is charged from within by thunderstorm activity because they have been told that the Earth is an uncharged body flying through an uncharged solar wind. But it has never been shown precisely how the thunderstorm charging process works. And it cannot explain the recent discoveries of strange discharge phenomena above thunderstorms[3], stretching up into space.

The ELECTRIC UNIVERSE® model argues that the solar system is not electrically “dead.” The Sun, like all stars, is a focus for a galactic discharge. Earth is a charged body that continually transfers charge from space to maintain equilibrium with the solar electrical environment. Thunderstorms are generated by a breakdown of the insulating layer of atmosphere between the Earth’s surface and the ionosphere. Leakage currents CAUSE the vertical winds in a thunderstorm and the charge build-up in the cloud. Occasionally, a bolt of megalightning streaks from the top of a large storm instead of its base. This 10-kilometres-high short-circuit throws the switch for a further powerful discharge to the ionosphere. The result is a towering diffuse discharge at very high altitudes – a “red sprite” or “blue jet.”

Walt Lyons was not justified in dismissing the danger of sprites simply because they appear diffuse. The electromagnetic “pinch” effect will ensure that the energy of that sprite will be focussed onto any large electrical conductor that blunders into its domain – as we see in the time-lapse photograph. The brightening of Columbia’s trail where the lightning joined it is due to the sudden release of energy in the more dense plasma of that trail. It is that kind of energy that was released over a few square centimetres of Columbia’s wing. Temperatures of tens of thousands of degrees would have resulted. The Shuttle’s tiles are designed to withstand 2900C.

In a sense, we are lucky to have water clouds on Earth because they act as a conduit through the lower atmosphere for the leakage current from space. They spread the lightning discharge activity in both time and space. That is why lightning activity is sometimes linked in separate storms covering a large area. We have many low-energy bolts of lightning and very few powerful strikes. Venus has no water clouds and the charge builds up to a much higher level than on Earth before being released straight from the ionosphere to ground as “super-bolts.” When discovered by the Galileo spacecraft as it swung by Venus on its way to Jupiter, the super-bolts surprised researchers. They were few in number and their power was very similar. That is expected from this model. But it highlights the problem that Venus has no equivalent to our thunderclouds. So, based on the earthly model of lightning generation, its lightning is an enigma.

It has been discovered that meteors can trigger sprites. Meteors leave an electrically conducting trail, like a lightning rod, from the ionosphere into the lower atmosphere. A spacecraft re-entering the atmosphere creates a similar ionized trail. Megalightning is six times more powerful than passenger planes are designed to withstand.

Prof. Edgar Bering, a physicist at the University of Houston in Texas, heads a team from NASA’s National Scientific Balloon Facility to study sprites by flying a high-altitude balloon above major thunderstorms. Bering’s balloon flights suggest that the currents responsible for sprites may carry far more oomph than anyone had suspected. Previous estimates suggested that the sprite-inducing current carries about 3000 amperes. Bering’s data, on the other hand, puts the figure nearer 12,000 amperes. This is not surprising if sprites provide most of the power that drives the storm. Whether this huge current could pose any direct physical danger to anyone is unknown. Airliners don’t fly in the mesosphere, but sprites can reach down into the cloud tops. And it is certainly possible that sprites could affect spacecraft, Bering suggests. Sprites are the prime suspect in the unexplained downing of a high-altitude balloon a few years ago.

“The charge that produces sprites is not below in the cloud, it’s in the mesosphere itself? None of the existing models will survive when people finally pay attention to what our data actually says.”
[Emphasis added.]

But the charge in the mesosphere has to come from somewhere. It comes from space via the ionosphere above.

The Earth is enveloped in a cosmic discharge, focussed on the Sun. So it is no surprise in an ELECTRIC UNIVERSE® to have lightning from space follow the ionized trail of Columbia. The dense plasma trail left by the shuttle is an ideal “lightning rod” of vast dimensions that could easily give rise to the reported corkscrewing rope of purple light blazing down from above. The sudden brightening of the streak shows that power was being concentrated into a destructive arc near the shuttle.

It seems that conditions in the ionosphere led to a powerful lightning discharge to Columbia – a rare “bolt from the blue” – which may have damaged a critical component or surface of the space shuttle. The lightning would be practically silent in the thin atmosphere and it would burn like a plasma torch. And insulating material, like the shuttle tiles or their adhesive, may shatter or explode when struck by lightning.

The metallic surfaces of aircraft hit by lightning may show a little damage but it does not impair their airworthiness. Columbia, struck by a super-bolt while travelling at 12,000 mph, was terribly vulnerable. NASA might be advised to send a tiled wing panel for testing to a lightning research facility.

I doubt that such testing ever happened. NASA’s perception of reality is governed by ideology and politics, not science. Heaven help the astronauts.

* Copies of the Megalightning video may be obtained from:
David Monaghan Productions
390A Hackney Road
London E2 7AP
ENGLAND